Custom Creations: I was sweating this one!

I've been working on a number of custom cards for someone who has trusted me with some pretty cool items.

A while back I showed you a Maurice Richard cut auto and a Jean-Guy Talbot cut auto. Although I was pretty nervous putting the cards together, I was confident in my technique since I was able to practice with photocopies.

The card I tackled today really tested my nerves. 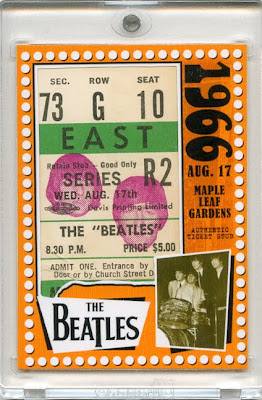 This was a one-shot only deal. I had spent days trying to figure out the best way to assemble this card without completely butchering it.

Needless to say I was extremely relieved when I finally punched it through my die-cutter. The back is just slightly off center, but I'm thrilled with the way it turned out.

It's a really cool piece I think. I did some research on the concert that this ticket was for. It was one of the last ever concerts put on by the 'Fab Four'. It was less than 2 weeks later that The Beatles played their final concert in front of a paying audience.

Labels: Customs, Outside The Box