A trip to the local card show today yielded some great results.

I picked up some base cards for my "One Sheet, One Set" project (about a dozen sheets worth) including a couple jersey sheet sets. I'll be getting those ready for show in the near future.

I also found three other cards that were too good of a deal to pass up. 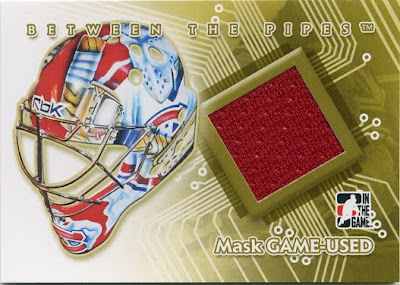 2007/08 ITG Between The Pipes
Mask Game-Used #MGU-06 Cristobal Huet
This set was on my radar back when it was released a couple years ago. These cards were a nice addition to the regular "Mask" cards. Too bad they were priced a little on the heavy side. As well, the print run for these cards are only 60 - so they were not too readily available.

Forward to today where I saw this beauty staring at me in a discount binder. The asking price - $4. On a forty dollar card, I couldn't get the toonies out of my pocket fast enough.

But the deals weren't done. 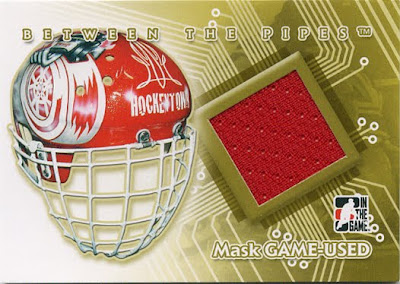 2007/08 ITG Between The Pipes
Mask Game-Used #MGU-02 Dominik Hasek
Second verse, same as the first. Now Hasek is one of those players who I don't consider having a "mask". He has a helmet...like Chris Osgood. Lame. Hasek even got a paint job done on it to make it look more mask-like. Lamer. I've never enjoyed the helmet on goalies.

Now, the last card I picked up was for no other reason that this guy was in my opinion the most complete player for the Canadian Olympic team that won the gold medal in Vancouver.

He was a question mark for me when the team was picked...but I won't doubt this guy again. He was a stud. Solid play. He'll be a staple on the blueline for the next 4 Olympics I predict. 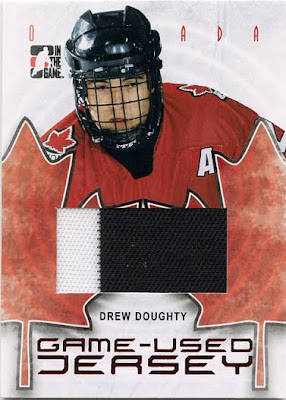 2007/08 ITG O Canada Jerseys
#GUJ-07 Drew Doughty
A two-color jersey limited to a print run of 100. The jersey taken from a Team Canada jersey. Gold medal winner. About to lead his Los Angeles Kings to the promise land (I predict good things over the next 3-5 years....see Chicago Black Hawks).

Are you kidding. I picked up these three cards for less than the pizza I bought at my sister's place yesterday.

That's why I love card shows. Hidden treasures!
Posted by bamlinden at 3:58 PM