Well it has been a while since I have posted a set from the collection (which has grown substantially I might add). I have over 100 'sheets' with easily another 60-70 on standby. I really like this project to see the various card designs out there from various time periods.

Sadly, this next set doesn't quite fit the bill as "good stuff". 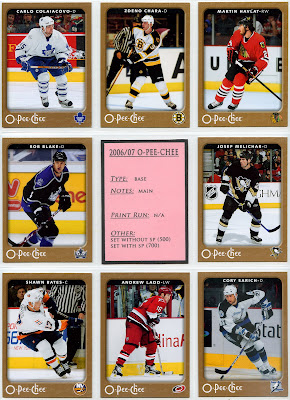 2006/07 O-Pee-Chee
Over the last 2-3 years, one of my favorite sets has been the O-Pee-Chee brand. Cool card designs, deep player selection, cool inserts and some tough jersey/autograph pieces. Outside the box thinking with the 'retro' set was introduced a couple years ago and I wouldn't be surprised if it is a staple for a few years to come.

The 06/07 set was a precursor to all that. O-Pee-Chee was just re-introduced into the fold as a release (the name now used by Upper Deck) and I think there was some ironing out of the concept that hadn't yet been made.

In total, it is a 700 card set. But 200 of those cards are shorter print RC's and inserts. Still, a 500 card set can be appealing to some set builders....if there is a good player selection and an exciting look to the product. 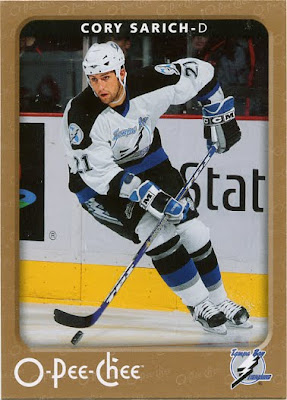 I'm going to say no. I can forgive the player selection thing (as everyone and their dog has a card in the set), but the look of the card is definitely not up to the standards that one should expect by now. The boring rounded border for the photo looks as if someone whipped it up in Photoshop just moments before going to print. It looks way too basic. The photo is a full body shot on all photos. Thanks for the variation! It looks like everyone is slowly turning left or right.

The name bar across the top - meh, I've seen a lot better. The bottom of the card front looks terrible. A huge O-Pee-Chee logo just plunked in the lower left and a team logo in the right. They look like they've just been placed there with no creative thinking at all.

The faint O-Pee-Chee texture blended into the crappy brown background is by far the most creative thing this card front has going for it. Wow wee!

My niece could come up with a better design.

Maybe the back of the card will yield better results. 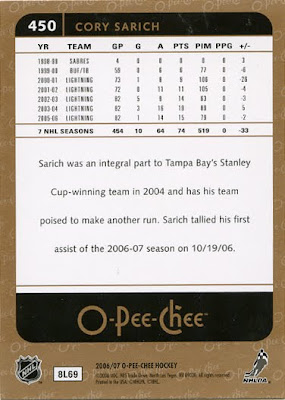 Oh yeah - where do I start.

This card back has more rental space available than a University campus during the summer. B to the RUTAL!

I will give mild points to the fact that they utilize the look of the front of the card. That said, crap is crap. Full career stats - nice. But what to do with all the extra space underneath? Lets print one sentence and spread it out to look like we've filled up the area. That just looks weak.

Hey great! Another huge O-Pee-Chee logo at the bottom....and in gold. That means it's goldy good.

Logos. blah, blah, blah just finish this card off with a wimper. The only other mild highlight is the introduction of the set name on the back (which has since become a standard with UD releases. I like this because now I know immediately what set this crappy card belongs to.

Overall (you guessed it), this set fails in just too many ways. If there is a positive, they didn't repeat this debacle (the 2008/09 OPC set is one of my faves). Sadly, they took a bit of a step back with photo quality in the 2007/08 set.

Maybe one day they can get all of the stars to align properly and they can put out a set to rival all sets. I think they have it in them.

But THIS set has very little in it.