TO THE BIKE SPOKES!!! - Glenn Healy

A while back I posted about goalie cards and how some look good when it is a closeup of a goalie as they take a drink of water. The freeze frame grab of the water splashing and what not can make for a cool looking card.

Here is an example of.....the exact opposite. 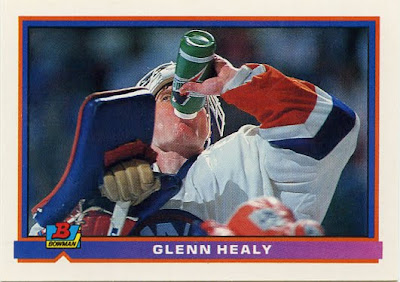 He sucks on the waterbottle. Apparently he doesn't like to spill.

I can see the bottom of the Gatorade bottle, underneath his blocker, his chin, his armpit. Wow......cool.

The guy doesn't even use a mask. Lame hockey helmet for him. Booooooo.

Again - is this the best possible shot of Glenn that Bowman had? They really needed to take a second look.

Then again, he was a career backup and it very well could have been the only photo in existence that season.

Regardless, it is one of the most unflattering poses I've seen on a card.