That made me a happy uncle.

I had hoped he would as those movies were everything to me as a kid. I knew Darth Vader was a bad guy.....but he was super cool in my books. And Boba Fett.....say no more.

I wanted the toys, the bed sheets, the drapes, the clothes, the Burger King drinking cups, and yes....even some of the trading cards. Although the cards didn't draw me in like hockey cards did at the time (who have thunk it).

As I grew older I still enjoyed the movies, bought some of the 'behind the scenes' books, biographies and so on.

When the new trilogy came out, I started geeking out like I did when I was a kid. It was awesome. I felt like I had the inside scoop anytime I would see the newest trailer for The Phantom Menace.

I enjoyed all the movies - right up to the last installment. I really enjoyed the in-depth documentaries released on the series as well. That's one thing George Lucas knows how to do to death. I love it!

Now, to see my nephew get into Star Wars really has renewed my interest in it. He is big into the Lego's. Holy cow are there like a billion different sets and a thousand different men or what. And they all hold their value on ebay.....yikes. It's going to be an expensive hobby for him.

Naturally, as my interest in trading cards has been ongoing for years, I decided to see what all was out there since the days of my Return of the Jedi sets in the mid-80's.

There are a ton of sets released. Lots of cool inserts and autographed cards. Some cool set building or side projects for sure. But I was really drawn in by one type of card - sketch cards.

Check out this web site and you will see what I mean.

Talk about inspiring. These cards look awesome. And to know that the artists actually drew on those cards....to be inserted into packs and pulled by lucky collectors. Fantastic stuff.

Thing is, I didn't want to collect these cards.....I wanted to make my own.

I went to work figuring out how I could do this. I found some good card stock with a bit of texture to it so I could easily draw on it. I built a border template in Photoshop and printed out some 'blanks'. A sharpie and some pencil crayons and voila.... 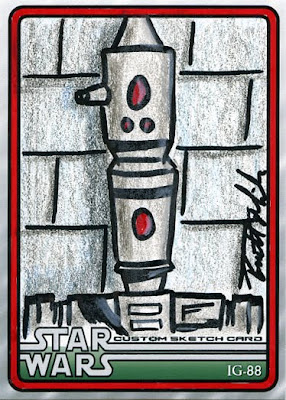 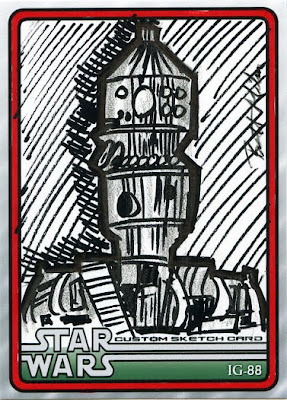 My first two custom Star Wars sketch cards are born. Yes, I know IG-88 isn't the most exciting character, but he's the easiest to draw for me.

I'm going to mildly refine things and maybe go out and pick up some better drawing utensils. Print out some more blanks and head on over to my nephew's place this weekend for an afternoon of fun.

I can't wait to see his Boba Fett card.
Posted by bamlinden at 8:22 PM