With the highly anticipated next chapter in the Panini hockey card story about to be released (Donruss), I thought I'd take a look at one of their releases from back in the day.

I was always a big fan of the Donruss releases. Two reasons....they tried to put solid photography into their sets and they had a good price point at the time.

I'll be very curious to see what this current incarnation will bring. 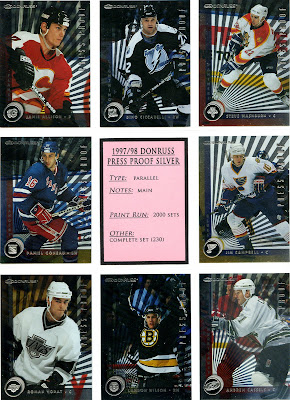 1997/98 Donruss
Press Proof Silver
(2000 sets)
This is a parallel release of the set so it's got a bit more pizazz to the design. Sadly, a bit of the pizazz is lost in the scans.

This was a 230 card release (identical to the base set) and featured a full foil card stock with silver foil accents. There were no stated odds when determining the rate of pulling one of these, only stating a print run of 2000 sets.

The other noticeable differences to the base card was the starburst design coming out of the team logo in the bottom left corner, and the obvious 'press proof' text along the right side. 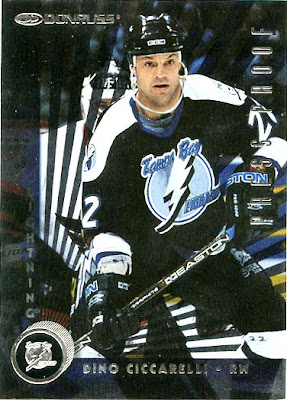 Taking a closer look at the card design, it sits pretty simple (as did a lot of the Donruss releases...not their strongest trait). The team logo sits in the bottom left and is an embossed silver foil 'puck' essentially. There are two color streams coming out of the logo - one going up the left hand side (and indicating the team nickname) and one along the bottom (with the player name and position).

The bars are blended in with the photo but still remains pretty noticeable with most of the cards. The font style used is nothing fantastic and feels more like a photoshop slap-in as opposed to a well thought out font design.

The Donruss logo sits in the top left and is again silver foil. Not a bad logo considering the fact that the full product name is used.

The borderless player photo makes up the rest of the front (along with the 'press proof' text indicating the parallel) and is a bit of a miss this year.

There's not a lot of action going on in the bulk of the player cards. A lot of 'staring at the play' or 'pass admiration'. Nothing that should go on the front of a hockey card.

The starburst effect is nice in that the designers painstakingly placed it behind the player making him sit forward on the card. This 'punch-out' effect is one of the few highlights of the card front. 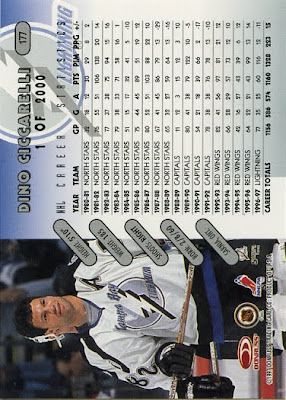 The back of the card is an example of an unfocused design attempt.

The player photo on the left is a different pic than the one used on the front (which is nice), but incorporates an even more boring selection of photos. 'Pre-game skates' and 'waiting for faceoffs' are even more brutal. Not a lot of action going on at all.

The stats are a complete list (which again is nice) but the pill capsules in the middle just ruin the design in my opinion. Why go with that? It comes out of left field in my opinion.

The same font style shows up again with the player name and still looks like a bad photoshop job. To mess things up though is no less than 7 font styles making up the complete back of the card. No focus at all.

The background under the stats is again lacking focus. Some gradient color dissolves and a cropped off team logo just looks rushed.

I will give points for Donruss trying to hide all the ugly logos and copyright info at the bottom of the photo. The sheer ugliness of the pic makes me breeze right by the additional headache.

The inclusion of the '1 of 2000' text under the player's name is the only indication of a parallel set.

All in all, it is a weak release from Donruss and not really a good example of the type of product they put out. The nice thing about it though is that singles from the set can be found in most giveaway piles (well, maybe not the silver press proofs....although I picked these 8 up for next to nothing). There is also a gold parallel limited to just 500. Seems like a lot nowadays.

The key cards in the release are Patrick Roy, Steve Yzerman and a rookie card of one Tomas Vokoun (who stared his career with the Montreal Canadiens). Those are the only 3 cards that book for over $1 (for the regular base cards).

The silver press proofs book at 20x to 40x the base card value. I doubt anyone would drop $40 for a Patrick Roy Donruss Press Proof Silver....so you'd be safe there.