I stumbled on a card show when I was headed to the library with my niece today. It was a nice surprise and I was able to pick up a few items for some of my projects.

I can add three cards to my 'Raise The Cup' project, and a pair of them are really nice vintage Habs.

The first one though is an addition to the 'Tales of the Cup' subset I've shown in the past. 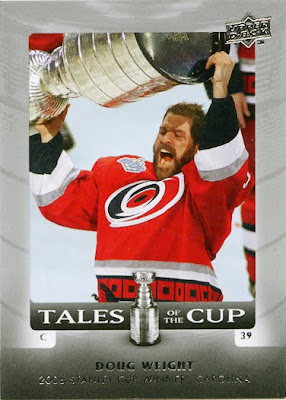 "When the Hurricanes center won the Cup for the first time in 2006, he filled the chalice with gallons of ice cream, chocolate sauce, marshmallows, chocolate chips and candy bits at his home in St. Louis, upon which his three young children happily dug in."

I can only imagine the photos that came of that.

A pair of ol'time Habs make the project from a nice Centennial set. 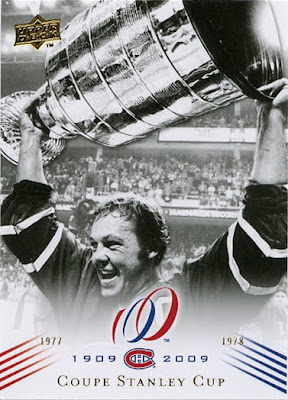 2008/09 Upper Deck
Montreal Canadiens Centennial Set
Coupe Stanley Cup #197 Yvon Cournoyer
These are some nice looking cards and this photo is from the 1977/78 season - the Habs' 21st Cup.

I really like the black & white photo and to get a close up shot capturing this moment...well that pretty much wraps it up in a nutshell as to what I enjoy about this project. 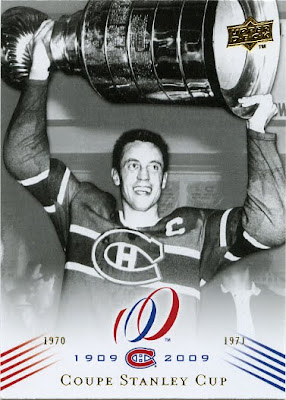 2008/09 Upper Deck
Montreal Canadiens Centennial Set
Coupe Stanley Cup #193 Jean Beliveau
Well, I didn't think things could get any better - but they did. This card features one of the greatest players of all-time and is considered one of the classiest to ever lace up the skates.

This photo of Jean is from the 1970/71 Cup victory and was number 17 for the Canadiens.

To see Gentleman Jean raise the Cup over his head (as opposed to drag it along the ice on a table - which was common at the time) really makes the expression on his face mean so much more.

Current Collection - 25 cards
Posted by bamlinden at 2:00 AM