With the continuous onslaught of new Linden cards coming in at a rapid pace (alright, I may be a embellishing things a tad) I've decided to go with an older card for this installment of the Linden Card Of The Week.

One of the more enjoyable aspects of this hobby is the ability to trade with others. Sharing the goals of finding that which has eluded us.....sometimes for months - sometimes for years.

Hobby boards and the internet in general has been an invaluable resource for tracking down numerous cards for my collection. But there's something to be said for tracking down a card in person and making an old fashioned trade.

Such was the case with this card... 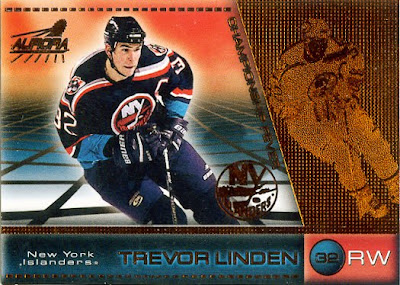 1998/99 Pacific Aurora
#28 Championship Fever Copper /20
It was probably 6 or 7 years ago when I went to a card show in Red Deer. I had been buying a table or two at the local card show for some time and there was a bigger show in Red Deer. A few of us from Calgary went and a few from Edmonton made it out as well.

I remember being really disappointed at the turnout (I'm thinking the advertising was pretty much nil for the show). Frustrated at what seemed to be a wasted weekend, I decided to take a closer look around at the other dealers to see if there was anything I could take back home.

Hiding in the back piles on one table was this little gem. Now, the card was about 4 or 5 years old at this point and I never really thought I'd find a copy of it (as they're only numbered to 20). I immediately asked what the asking price was and if the owner would be willing to trade.

He popped over to my table and noticed a Luc Robitaille rookie card. He also scoped out a Patrick Roy 2nd year card. Combined, I think the price tag would have been $50-60 bucks. After some pondering, I decided to agree to the trade.

On the ride home, I was talking with one of the other dealers I drove up with and he mentioned that I paid a steep price for the card. My first thought was 'you're right', but that quickly waned and I said "Maybe so, but I'm coming home with a Linden card that I never thought I'd find. How can I be disappointed".

Years later, I consider it the best trade I have ever made for a Linden card. The two cards I traded could probably be had for $20 now. The Linden....well let's just say I have never seen another copy of it surface - ever.
Posted by bamlinden at 10:01 PM