OPINION: BACKING OUT OF DEALS

Over the holidays I've had the opportunity to land some great additions to my Linden collection. A lot of new releases, a lot of parallels, a lot of low numbered cards.

I had the chance last week to land one of the more rare Linden cards out there. An ITG Ultimate Memorabilia Fight Strap card /3. I was thrilled to see it and was anxious to get some info on it. 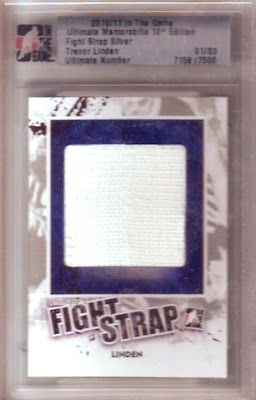 Immediately, I contacted the seller asking if the card was available and if so - how much. I received a prompt response saying he was looking for $150.

Now, I knew that one other copy of the card has already landed in the hands of a Linden collector - so that leaves two cards available. I felt that $150 was a good price and so we struck a deal.

I fired off the funds to him immediately and he said he would have the card off to me after the holiday rush. We both confirmed the deal on the trade boards and it was just a matter of time before I added yet another gem.

A couple days later, I received a full refund from the seller. He contacted me to let me know that he had cut a deal earlier on another trade board for the card and he had forgotten about it. He said that while I was the first to pay, the other guy was the first to strike the deal. Coincidentally, we both bought the card for the exact same price. He said that he was torn as to whom to sell the card to - so he decided to just hang onto the card and refund us both.

Disappointed, I understood and asked to be given the heads up when he was looking to move the card again. He appreciated my understanding and said he would.

I was a little surprised then to find said card up for grabs on ebay tonight....with a rather healthy $500 'Buy It Now' price attached to it. While there is the chance to throw a 'Best Offer' his way, I started to wonder what the scoop was.

I confirmed with the seller that it was indeed the same card and asked what was up? He said that he's putting it out there for a ridiculously high amount not expecting to sell the card.

He's already received an offer of $250 for it. An offer he plans on turning down.

I told him that if I had known he was going to put the card up on ebay and was looking for that high a price, I'd have preferred him sell it to the other original buyer. No point in having neither one of us not get the card.

I wonder what the other original buyer of the card feels about the auction and the whole situation in general? If you're out there, drop me a comment and let me know.

In all honesty, it makes me feel like the seller had second thoughts at selling the card for what he considered to be a low price and is just looking to maximize his return. I hope I'm wrong...but that's what my gut says.

I think the point of all this is: If one makes a mistake and 'double sells' a card - at very least, one of the two buyers should get the opportunity at the card.

I smell something fishy when not only the seller neglects to contact the refunded buyers, but is looking to get probably double what he had sold the card for originally.

It's sad, because it would have been a great addition to the collection. I just see no rational way that I will be able to get my hands on it now. I refuse to pay twice what I originally had an agreement upon.

A note to all sellers - keep track of your ongoing sales. I understand mistakes do happen, but a lot of times, these situations can be avoided.
Posted by bamlinden at 12:30 AM