RAISE THE CUP - Getting Caught Up

Another month, another trip to the local card show. I was really looking forward to this one as there have been some product releases with Trevor Linden included in them. It has been a while since I have snagged a Linden card for the PC at a card show.

While I did find a Panini Limited 'Legends' base (which was given to me by the vendor....thank you!), there were some greater successes with some of my other projects. Most notably, my Raise The Cup one. 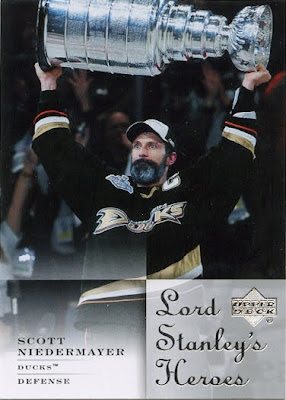 2007/08 Upper Deck
Lord Stanley's Heroes
#LSH4 Scott Niedermayer
All I have to say is - Scott Niedermayer looks like an old man Muppet with that beard and those possessed eyes. Scary and funny all at the same time. 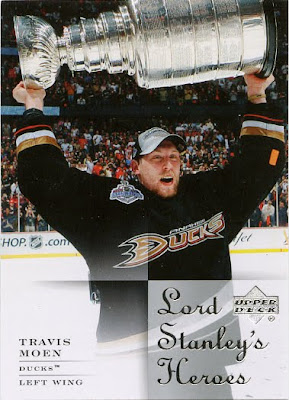 2007/08 Upper Deck
Lord Stanley's Heroes
#LSH7 Travis Moen
Cool to see a key grinder get some face time in this cool looking insert set. I remember him (and his whole line) really stepping up in the finals. Remember Sammy Pahlsson? And who could forget.......wait.....what? Rob Niedermayer? The consummate floater? Ugh! Well, two outta three ain't bad. 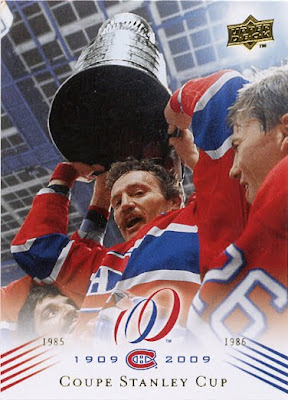 2008/09 Upper Deck
Montreal Canadiens Centennial Set
Coupe Stanley Cup #199 Larry Robinson
A couple of cards from the Habs' Centennial set as well. A great looking bunch of cards coming from this product. Fantastic photos that for the most part I have never seen before.

That said, this card (which celebrates the 1986 Cup victory) has a cool looking photo, but would definitely not be the pic I would use to represent this victory. Remember some guy named Patrick Roy? He definitely deserves some credit and this would have been a fantastic opportunity to include him here. 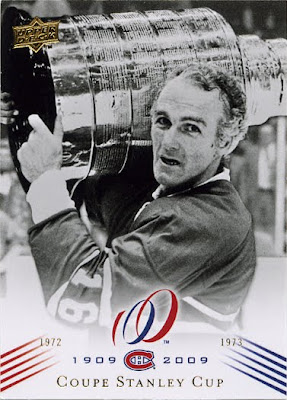 2008/09 Upper Deck
Montreal Canadiens Centennial Set
Coupe Stanley Cup #194 Henri Richard
On the other hand, this is a great looking photo to have represent this victory (the 1973 championship). It epitomizes the hard work and domination that the Habs had that year. Check out some of the players in the lineup...

Oh, and to top things off, let's just have Scotty Bowman coach the guys.

Why even play the games.


Current Collection - 29 cards
Posted by bamlinden at 1:25 AM