Well, I've got a new feature I'm going to start. It's a pretty simple one, but it satisfies my need to do customs (temporarily) as well as show off some cool goalie masks.

'Rate My Mask' is a pretty simple concept. I'll show you a mask - and you rate it.

We're going on a scale of 0 to 5 (half points allowed), zero being the worst and five being the best.

Tell me why you like it or why you hate it. Simple as that.

This mask is my favorite mask unveiled this season (and one of the coolest I've seen in quite some time). 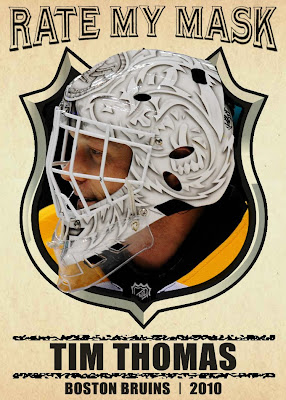 If you look carefully at Tim's mask, you’ll see that the Bear from last season’s mask is still there – but hidden in shades of grey (very 'outside the box').

The Bruins logo from the front of his older mask has been replaced with a representation of the medallion he wears around his neck. The chin has Tim’s 'TT' logo on it and he has changed the back plate from the “Beware Of Bear” logo to an American flag with ”Don’t Tread On Me".

Designed by Steve Nash (no, not that one) of eyecandyair.com, the white was chosen as the base color because goalies have gone towards white for equipment in general (it makes the goalie seem bigger).

So when a goalie wearing white says "Do I look fat in my equipment?", you can say yes....and he will surely be happy.