The Hawks continue their quest to push their series with the Canucks to a game 7 with what should be a very story-filled game 6 Sunday in Chicago.

The Black Hawks have had a real odd playoffs so far. Down 3-0, battling back with two dominate performances (or Canuck collapses), Kane and Toews have not been the scoring threats they were during the regular season and their lineup is a shadow of what won them the cup last year.

That cup victory is the inspiration for this installment of Cardboard Photography. 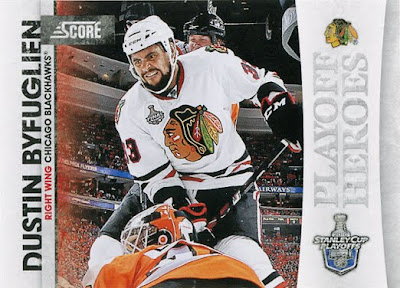 This pic of 'Buff' looks to be a goal cam shot that's been cropped. I really like the Philly orange in the background. All 4 tiers of the seating area. It makes Dustin stand out even more.

Take a look at the expression on his face. That kind o intensity is what the Hawks will need to push this series to the brink. They could use Byfuglien at a time like this.

The foreground goalie just adds to the drama and timing of the shot and makes the photo complete to me. And is it me or does the photo have kind of a painted or drawn look to it? I really like the effect put on the pic.

Regardless, a great photo from a great event and it just goes to show you that a solid looking card doesn't always have to book for a ton of cash.
Posted by bamlinden at 9:27 AM