It was trader night at the LCS and I made sure to attend this one. Seeing as my favorite product of the year - Between The Pipes - had just been released.

I knew there would be some pack war action.

Sadly, not as much BTP as I would have liked (the product of choice that night was SP Authentic....of which I ended up winning a round).

In addition to all that goodness, there was an Upper Deck World Of Sports pack war. Um.....OK......whatever.

I think what convinced me to join in was the potential to land a Michael Jordan autograph.

I ended up winning 2 out of 3 rounds giving me pretty much all of the 'hits' from the box. So here's what I won. 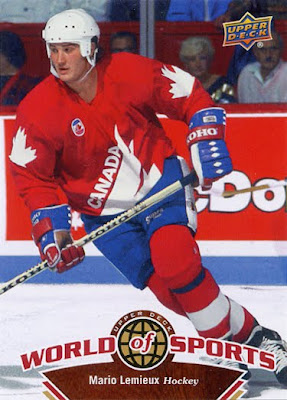 Yes sir....a Team Canada Mario Lemieux base card. Pretty special eh? Actually, I thought I show off the simple design of the base cards. Some of us felt like we were time warped back to the early 90's...can you say Pro Set Platinum? 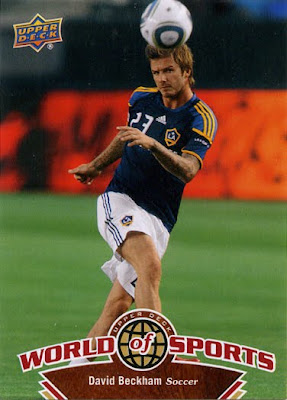 The sports that were heavily represented were hockey (Team Canada only), soccer (MLS), Olympic sports, lacrosse, college baseball and figure skating to name a few.

It was a weird mix - too random for me. 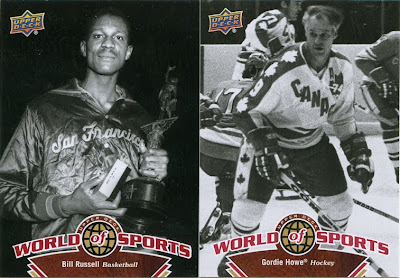 They did a decent job with some of the 'older' cards in the set. Older meaning the photos from the 60's and 70's. It was OK stuff.

As you can see, a pretty eclectic mix. But, I guess it must appeal to some or they wouldn't produce the stuff.....right? 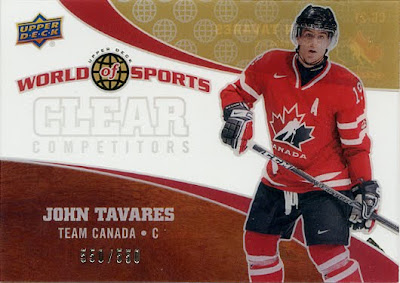 The only thing that would have made this card better is a nice hard-signed autograph. There's a spot just screaming for a signature. 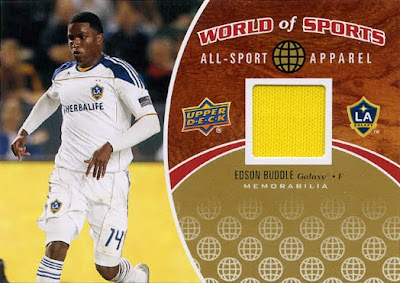 Cool. Game used undergarments. I'm assuming so since I don't see any yellow in the photo (unless that undershirt got donated and cut up). Never heard of the guy so I'm assuming he's not that good. 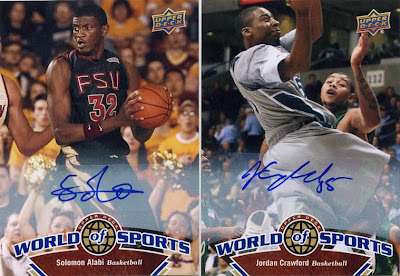 Nice! Autographs from a pair of college basketball players I've never heard of. Maybe this product should be called World Of Sports Athletes You've Never Seen Before (And Will Never Hear From Again). 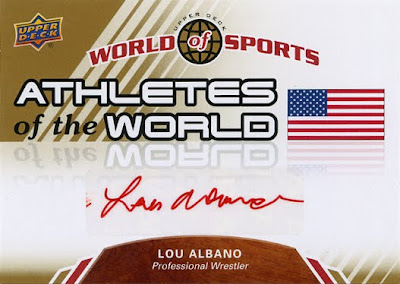 Wait a minute! Wait just a minute. I'm a product of 1980's wrestling. I've heard of this guy. And there's no photo. This must mean that this card is worth a bazillion dollars.

Actually, after all is said and done, to win 3 autos, a piece of game used gear, a numbered insert and a shwack of base cards, I'd say this was a pretty successful pack war victory.

Especially if I can sell the Captain Lou Albano signature for the price of my entry.