The recently past Bossa Card Show might go down as one of the most productive when it comes to some of my various collections. Over the next couple weeks, I hope to share in more detail some of my pickups.

You've already seen the four cards snagged for my 1 vs. 100 project, so I won't dwell on them anymore. Instead, I'll give you a quick preview of the rest of the haul.

First off, the swag. Gotta love free stuff. And the Panini bags handed out on the Sunday were a nice extra. My bag had a couple nice goodies in it. 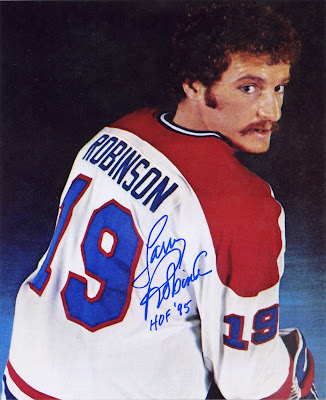 Larry Robinson 8x10 autograph
They must have had some extra signed pics from the day before. This was a nice treat (although the photo is little to be desired). Great signature! 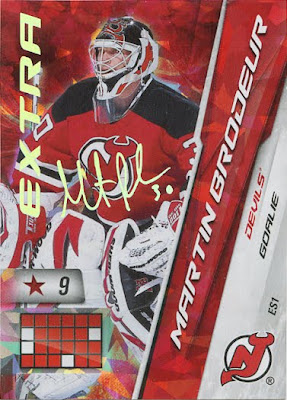 In the swag bag was 5 packs of Panini Adrenalyne XL. I've never seen this product before, but apparently it's built like a game (Pokemon, Bakugan, etc.). The Brodeur looks to be a tougher parallel to get. A nice bonus. 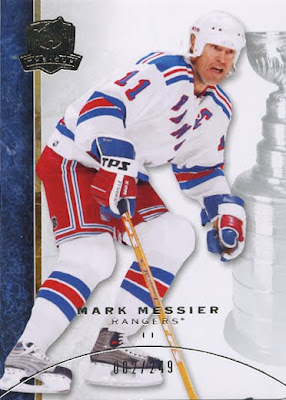 Some high end base cards were a bit of a surprise to pick up. Anytime I can get Cup base for a buck a piece - I'm in. I also snagged some Enshrined base and some sharp looking Topps from the late 80's. Will make for some fun 'One Sheet, One Set' show & tells. 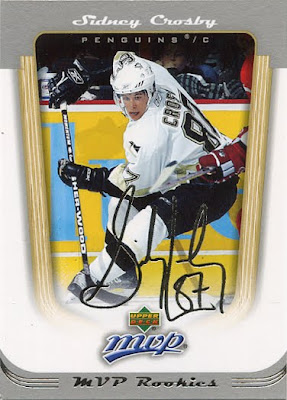 One seller had blaster boxes of 05/06 MVP on for half price - you NEVER see this stuff on sale. I had the delusional thought of pulling the much needed Linden Prosign (only 1:480 packs for the Prosigns).

Didn't get one, but found a Crosby RC in the mix. A nice consolation. 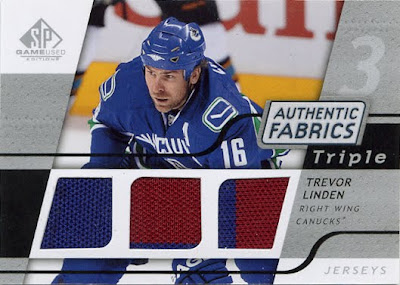 I actually found a couple Linden cards at the show. None that I actually needed, but this beauty is a definite upgrade to my current copy. It's by far the best copy of this card I have seen. 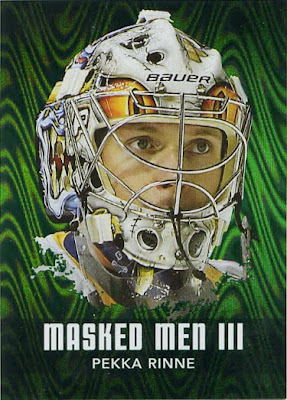 BTP Masked Men III was on the top of the radar this weekend. I wanted to put a dent in the wantlist. By the end of the weekend - I did. And for a decent price too. These are some nice looking cards (and they scan nicely too). 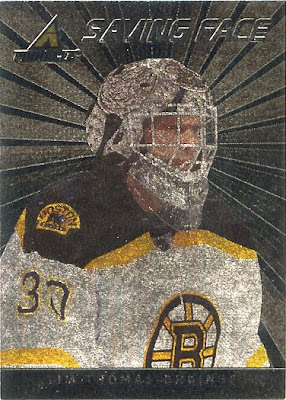 These do not scan well. Panini's attempt at a mask set. This one looks to be a colossal flop. Out of the 19 cards in the checklist, it appears 6 were not produced - LAME. I will give points for using a photo of Tim Thomas in his new mask (ahem ITG!) as well as using Jonathan Quick's Retro mask (the Vachon tribute). 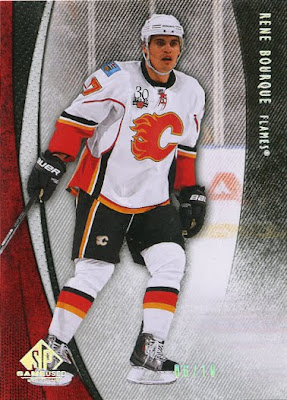 I also had the opportunity to find a couple cards for other collectors. This Bourque has already been spoken for and is on its way out of the city. Glad to see a rare parallel find its proper home. 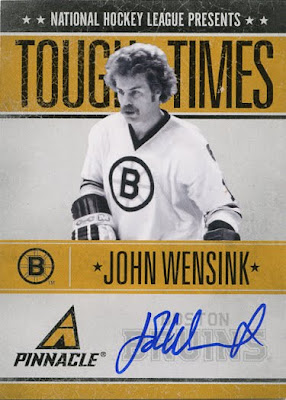 This one was a 'must have'. I love the design of this set - completely set up for autographs. The hard signed sig of Wensink just adds to the coolness of the card.

Not sure if I'll try to build the set. Right now, I'm just trying to get a 9-page sheet filled (sans autos). Maybe this card will be used as a trader instead. :)

Overall, a great time was had at the card show. Thus ending a season of shows. If you have a chance to go to a show in your area - do so! Supporting local card shows ensures that they will continue in the future. While they are dwindling in quantity over a season, they can still attain quality.

I've said it before and I'll say it again - I cringe the day that card shows become extinct. As much as I love ebay and online trading, local card shows offer so much more than one would think.
Posted by bamlinden at 12:58 AM