Tonight was the first time in weeks.... dare I say months, where I did absolutely nothing.

And I loved it!

It gave me a chance to recharge my battery, catch up on a few things I let slip for too long and it allowed me to throw together a couple blog posts.

I decided to rummage through the ol' closet to do another show and tell of some oddball stuff in my collection. 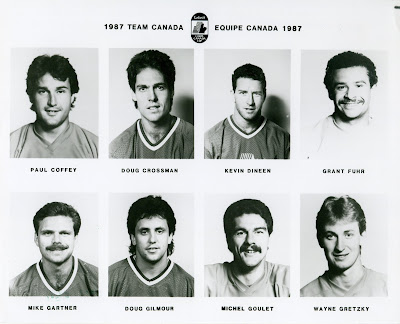 What we have here is a 4-sheet set of headshots from the 1987 Canadian Team participating in that year's Canada Cup.

I picked these up at an antique show a few years ago. The guy I bought them off of used to work at a newspaper and these 8x10's were used as the 'go to' headshots when photos were needed to support a writer's article. 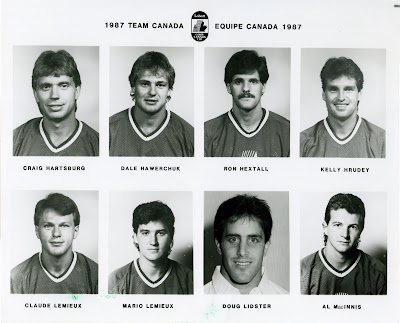 In the mid-90's, the NHL moved away from the 8x10 and went to slides. Those only lasted a couple years before everything went digital.

Nowadays, they probably don't even put them on disc, I'm sure it's just a download or something. 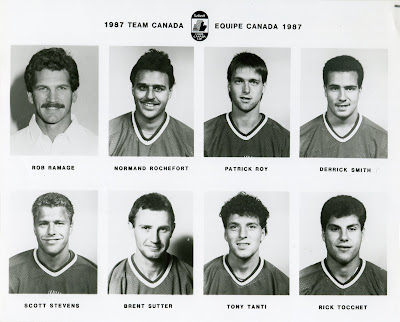 Obviously, the big coup when it comes to this set of photos is the player selection. Gretzky, Lemieux (Mario that is), Gilmour, Hawerchuk, Coffey, Roy.

If I remember correctly, he was never on the 1987 team. He was snubbed by Glen Sather, who picked Grant Fuhr for the job instead.

What I love is that Roy was still photographed and included in this team set.

What a rare addition. 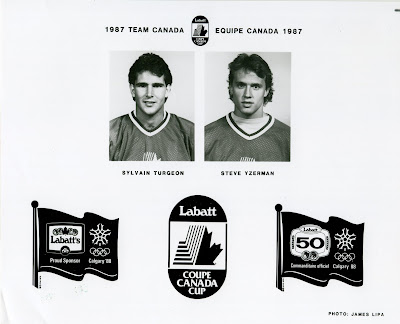 And how about that photo of Steve Yzerman? Can you say 'deer in headlights'? Maybe that's why he was snubbed for so long in international play.