I was going through my monster box full of Linden cards recently, enjoying my collection, and realized that there were some cards that weren't getting the 'face time' they deserved.

I keep all of the cards in my Linden collection in penny sleeves and top loaders, except for the jersey cards which get the magnetic one touch holder treatment. My 1/1's also get this extra bit of protection.

The top loaders fit nicely into a couple monster boxes, and the magnetic holders while taller, do fit in as well.

I'd say 95% of my collection sits in these two boxes. There are some cards however that do not.

With Trev having a few cards in this year's Ultimate Memorabilia, I have gained some slabbed cards. A new addition to the storage, I have had to put them in their special little place. But these slabbed cards are not the first to grace my collection.

That distinction belongs to this card... 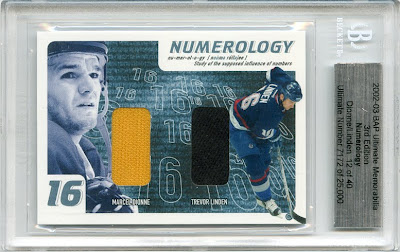 2002/03 BAP Ultimate Memorabilia
3rd Edition - Numerology
Marcel Dionne/Trevor Linden /40
Released almost 10 years ago, this dual jersey card was step above a lot of the cards in my collection at the time. Add to that the fact that there were only 40 cards produced, and the desirability quotient skyrocketed.

What I love about this card is that it celebrates what has become my favorite number in the NHL - #16.

Linden to me will always be #16. When he went to New York donning the #32 or Montreal where he took on #14 it just seemed wrong. Vancouver and #16 - that was the jersey he was meant to wear.

Marcel Dionne was a very heavy influence in Trevor Linden's career. And the #16 was a quick choice after the #9 was unable to be fitted with Linden's name (it was in possession of Tony Tanti at the time....and I guess he did have enough pull to keep it).

But Dionne was not the only #16 to influence Trev. Bobby Clarke, Rick Middleton and Henri Richard also wore the famed number.

One interesting bit early on in Trevor's career was that he started with #49 during rookie camp. 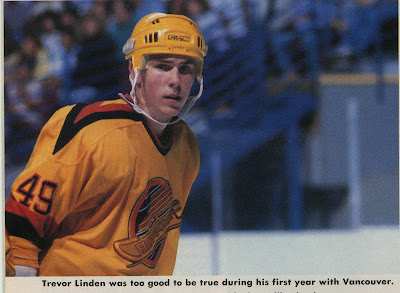 Now I don't know about you, but I can't picture a #49 jersey raised to the rafters with Linden's name on it. 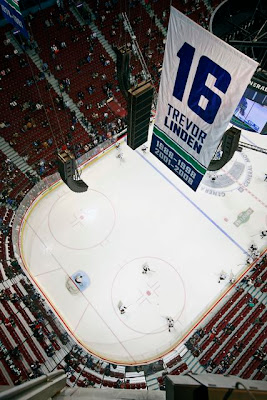