Well it's about time! Six whole months have gone by since I've added a card to this project.

Way too long of a span if you ask me.

Granted, I haven't really been pursuing any of the cards on the wantlist too aggressively. Plus, the ones left aren't the easiest to find.

I had one deal for three cards fall through a few months ago. A tough break, but what can you do.

This card though was as easy a transaction as you could ask for. 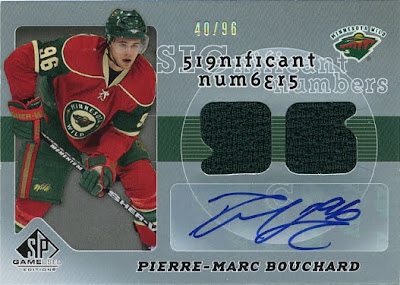 2008/09 Upper Deck SP Game Used
Significant Numbers
#SN-PB Pierre-Marc Bouchard /96
One of the higher numbers left on the list finally gets scratched off.

I knew of this card as it was in the three-pack I was supposed to get a while back.

A rock solid trade from a guy who I actually met at the Toronto Expo....just a couple days before the card arrived in the mail.

He actually asked me if I had received the card yet. Genuine concern over the transaction - now that's a lost art.

Thanks very much Wes for the great trade. This one's a keeper.