A small mailday only in numbers today - not in quality of cards.

I've been looking forward to this one for about a month. 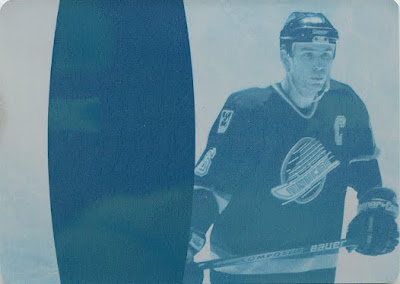 2010/11 Panini Dominion
#150 Printing Plate Blue (I think) 1/1
I was a little concerned when I opened the Priority envelope only to find a little damage to the bubble mailer. Inside was the card inside a toploader - tightly taped shut.

Now with base cards (or thin stock cards), taping it shut is not a huge issue. But when the card is 130pt (or THICK), this can put a lot of strain on the toploader.....which it did. Cracking it.

I was a little worried that the card might be scratched, so I spent a lot of extra time not aggravating it.

Thankfully, the card escaped unscathed. But a simple note to the sender came abruptly after.

Enough of the drama, let's enjoy the card.

I think this is the 'blue' plate as it does have a predominantly bluish hue (makes sense). Dominion also included a 'black', 'red' and 'yellow' plate in their release.

As I mentioned, these suckers are thick. And they have a metallicy surface while the bulk of the card is just thick card stock. 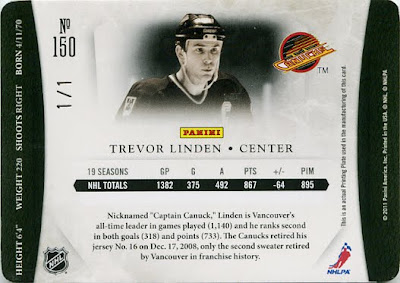 I also like that the corners are rounded (I don't know why simple things impress me).

I was surprised at how little I ended up paying for this card. It seems that anytime a low print run Linden comes up for bids, the price starts going through the roof.

This one went for less than half of what I figured it would - and I'm happy it did.


In addition to the Linden printing plate, another card from the whirlwind ITG Ultimate Memorabilia 11 arrived. 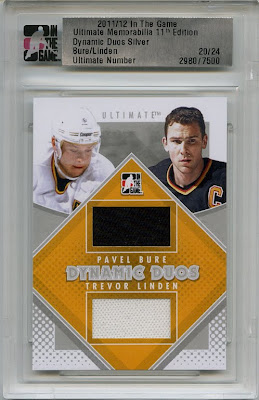 Although I never really connected these two as a 'duo'. Yes, they played on the same team at the same time, but they never really shared a ton of ice time together.

Nonetheless, it's another great card to add to the rapidly growing 'slabbed card' portion of my Linden collection.

And that's that.
Posted by bamlinden at 9:12 PM