With this recent haul of bubble envelopes, I admit to having mixed emotions. On the one hand, I have three more top notch Linden cards to show off (and cross off the wantlist), but I currently have no more cards incoming.

No trades, no purchases, nothing to look forward to.

Actually, it's not all that bad. My bank account surely appreciates the rest it's getting. And I know that there will be more on the horizons.

The lull is nice to be honest. Panini recently released it's 'Certified' product for 2011/12. Last year, there were nine Linden cards in the mix (and at the time I thought that was rough). This year - NONE!

On to the Linden show. 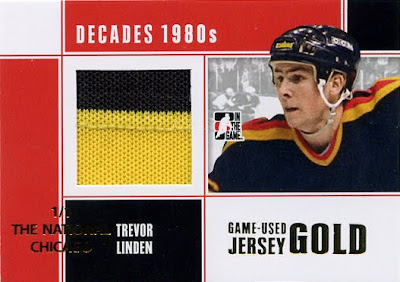 2010/11 In The Game Decades
Game Used Jersey Gold
#M-62 SHOW The National Chicago 1/1
Another expo redemption card to add to the crazy long list. With 9 different jersey/emblem/number cards in the regular release, I can only assume that there is an equivalent redemption card to go with it.

I have show cards from both the Chicago National as well as the Summit II in Edmonton last April.

That makes 18 different 1/1 show cards (if a complete run of each was released).

I have a whopping 4 of them.

I've got a loooooonnnng way to go.

This card though has a nice seam in it and for the price, it was a no-brainer. 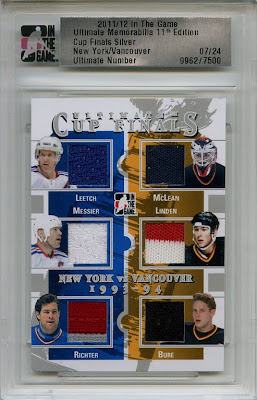 2011/12 In The Game
Ultimate Memorabilia 11th Edition
Cup Finals Silver /24
Oh, this card is bitter sweet. On the one hand, it's a great reminder of what I consider the greatest Finals series I've ever seen.......but the wrong team lost game 7. On the other hand, it's the first card to feature both Linden and Mr. 'I'm not going to type what I'd really like to type' Messier.

I love that the Linden piece is two-color as well. 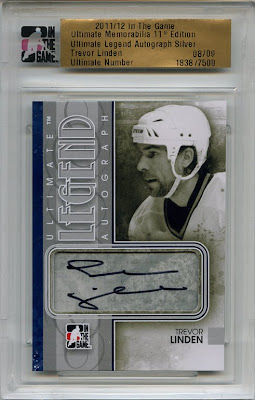 2011/12 In The Game
Ultimate Memorabilia 11th Edition
Ultimate Legend Autograph Silver /9
This is a stunning looking card. I really like the design of it.

That must be the reason why I accidentally paid way too much for it.

So I notice this card on one of the hobby boards and immediately go to work on researching what I should offer the seller for it.

The first place I go - ebay.

Well, the seller agreed - with enthusiasm.

After I paid for the card, I went back to the ebay auction. It seems that I used the 1/1 parallel of the card as the price gauge. Hoo-boy.

I probably could have gotten the card for half what I paid for it (well, maybe not that low....but definitely under $100).

What could I do other than wait for the card to arrive.

I guess proudly show it off. :)

With this pickup, I am now down to the base card /63, the gold parallel /9 and a card called Hot Patch /9. The Hot Patch cards came only in 'hot packs' where all three cards would be of a unique design - all bearing a nice looking patch card (makes sense).

I've seen two of the Hot Patch cards so far, but neither had a patch that made me say 'wow'......in a good way.

I guess there's always something to wait for.
Posted by bamlinden at 2:04 AM