TO THE BIKE SPOKES!!! - Mark Messier

ALL MARK MESSIER CARDS CAN GO STRAIGHT TO THE BIKE SPOKES!

There, I feel better.

Especially after what I witnessed at Traders Night a couple days ago.

I always get a little excited at any new product releases that include Trevor Linden. Even more so when the company doesn't go gangbusters with insane parallel numbers.

2011/12 Panini Crown Royale is just that. A nice, reasonable amount of cards to chase with a couple ultra-sharp pieces of cardboard to drool over.

So you can understand that I was excited to see any sort of Canucks jersey come from the numerous packs being ripped throughout the night.

That was until my eyes caught this atrocity. 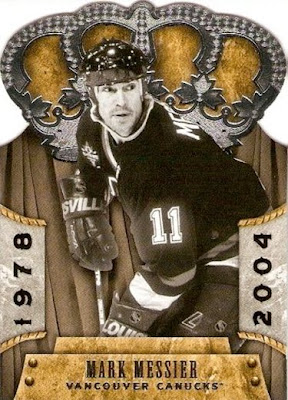 2011/12 Panini Crown Royale#103 Mark Messier
To put it bluntly - having 'Mark Messier' and 'Vancouver Canucks' on the same card is just a huge NO.

I don't care if you can't really see the jersey logo, I know it's there. And I hate him for it.

And that goes for you too Mike Keenan.

Put him as an Oiler, put him as a Ranger. And as much as I loathe it, put him with the Stanley Cup in 1994. But you do not - I repeat - NOT put him in a Canucks jersey.

Nothing else needs to be said.