LINDEN CARD(s) OF THE WEEK: The Complete Show

One of the benefits of being a regular at the monthly card show is that people get to know you.  Dealers learn what (or who) you collect.  And if you are fortunate enough to build a good rapport with some of these guys, they might even keep you in mind during the 4 weeks in between the shows.

I've been going to the same monthly card show for well over a decade now.  When the winter months come, it is something I look forward to.  Part of the reason is that I know a number of sellers will have Linden items primed and ready for me if they've recently pulled him out of their new product breaks.

Two things I've noticed over the past couple of years though.  Up until a year ago, Linden was a tough pull.  He wasn't in a lot of product and so the odds of hitting a Linden were pretty thin.  The past year, he was also a tough pull.  But not because he wasn't in products.  In fact, he has a lot of cards out these days.....but there are a lot of them limited to 10 copies or less.  The sheer odds of pulling a Linden were long.

And today, it paid off in spades. 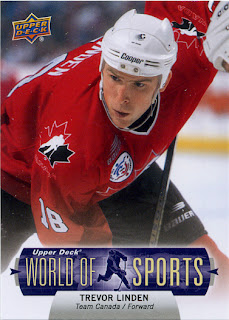 This is a card I have been hunting down for quite some time.  It comes from a multi-sport product where the hockey portion consists of international play.  Linden has rarely been featured as a member of Team Canada and so this card gave me some additional fuel to the fire.

I really like the photo Upper Deck chose to use and I also like the fact that Linden is wearing his incredibly non-traditional #18 (must have been Sakic that was also on the team I'm guessing).

It took me a while to find this card for a couple of reasons.  First, I refuse to pay a buck on ebay for this piece of cardboard and then have to shell out three times that to have it shipped.  I'm definitely not in that much of a rush to cross it off the list.

But this was not a heavily opened product.  Finding people with singles from this release took some time.....but patience paid off. 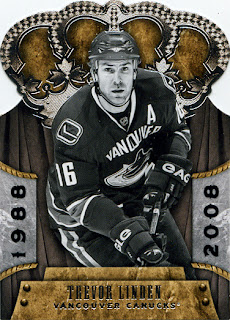 That's right....another base card.  Hey, when you collect a player, all cards - even base cards are good ones to get.

This gives me 2 of the 3 cards put into this year's Crown Royale product.  I like the fact that a release with Linden in it doesn't have to be overwhelmed with parallels or inserts.  In this case, a base card, an insert and an autographed parallel (which I still need) keep me (and my wallet) very happy.


The main reason I was looking forward to today's show was that it was the first one since the release of ITG's Captain-C.  I was hoping to find a couple tables with singles available.

I found just that. 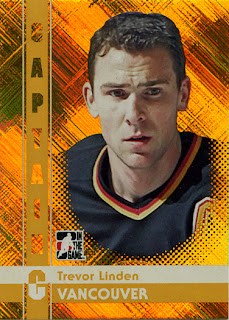 This was one card I was really hoping I would find.  The silver base cards are limited to just 150 copies (and I have one on the way....I traded for it) but the gold parallels have just 50.

These days, 50 copies is a lot.  I was confident that if I found a copy, I would be able to pick it up for a really low price.

I did.....but only because I bundled it with the last two cards. 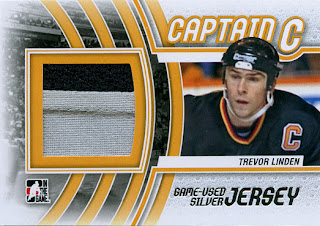 I'll admit, I didn't need to pick this card up....I have one on the way (my one blemish on getting the Linden cards from this product).  I bought a copy of this card thinking that a 2-color copy of the silver level jersey card (90 copies) was rare.  It seems though that is not the case.

I was able to get this card for a very fair price and I'm sure it will serve me well as a part of my Linden traders.

But the last card is the one that made the jaw drop. 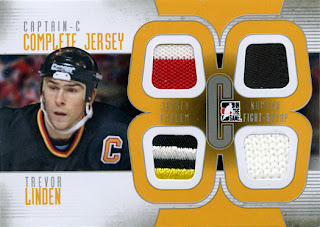 There are just 9 copies of this card made.  I've seen 4 of them already out and about (on ebay and in Linden collections).  To find this at a local show is something I'm still shaking my head over.

This is a perfect example of a dealer knowing that I collect Linden and hanging on to this for me.  He didn't even have it on his table (and it's a good thing too.....someone else might have snagged it, looking to flip it).

I asked the price tag and was really happy to find that it wasn't ridiculous.  Firm and fair.  And I couldn't get the money out of my pocket fast enough.  Actually, I had to go to the bank because I wasn't prepared to find a high-end Linden like that.

Do I care that the swatch on the 'number' portion is lame?  Nope.  Do I care that the 'emblem' isn't as stunning as on some of the other examples I've seen?  Nope.  This is a Complete Jersey card /9!  When you see one locally, you just buy it and be happy that it doesn't have to be shipped in the mail or that you have to deal with the faceless sellers on ebay.

It was a slam-dunk....and I couldn't be happier.  This was hands down one of the best Linden pickups I've ever had at the local show.

I wasn't expecting that when I woke up this morning.
Posted by bamlinden at 2:20 PM