It was a pretty sweet weekend in the world of sports.  I caught my fair share of baseball (Toronto looks like they might have something in the tank this year....especially with the additional wild card spots; and 0-3 for the Yankees....nice) the Masters was awarded to Bubba Watson (in a pretty dramatic final day of competition) and the NHL is gearing up for my favorite time of year.....playoffs.

The playoffs always shoot me back to a time when I was a kid.  Elementary school and a feeling of invincibility.  The Flames had just come to town and hockey fever was truly in the air.  Back then though, it was the New York Islanders and Edmonton Oilers showcasing their dominance.  Oh how I miss those days.

So I pulled a set out of the binder to show off and bring a smile to my face.  But I promise....no bonus points for nostalgia. 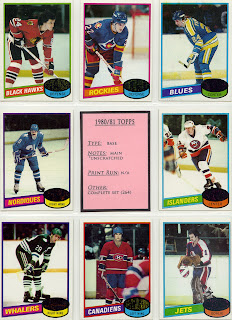 The 80/81 season was my introduction to hockey cards.  Buying packs, trading singles, learning more about the players in the league.  Building that 396 card set was a daunting task (after all....I was 7) but it was fun to hunt them all down.

At the time, I had never heard of Topps.  To me, it was OPC all the way (I thought that was all that existed).  It was years later that I learned down in the States, they went with the Topps brand name.

Even longer after that, I found out that the Topps product had a neat variation to the 80/81 release.  In addition to being a smaller sized set (264 cards), the player names were covered up. 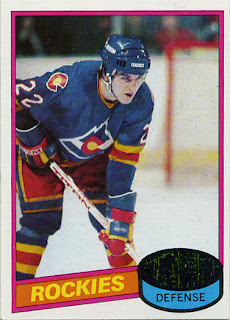 That's right.  Like a 'Scratch 'n' Win' ticket, you had to take a penny and scrape the black off the puck to reveal the player's name.  As much as I think that's odd....I find it pretty cool.  Especially when you find some singles (just a year ago in a quarter bin) that are unscratched.

But let's take a look at the design of this iconic (in my eyes) set.

A colored border coupled with the team nickname along the bottom leads your eye to the puck which has the player's name in it.  Hey, I just realized....I have no idea who this guy is.  The position sits just underneath.  It's weird not seeing any french on the card (I'm so used to that).

Other than that, you have a photo.  Unfortunately, in the late-70's, early-80's there was an abundance of player shots consisting of warmup laps, pre-faceoff stances and 'in between whistle' "action".  Boring!

I'm amazed I hung on to this ridiculous hobby with that kind of first impression. 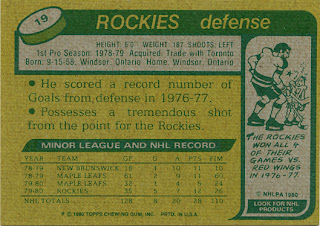 At least the back of the card had some appeal.  The good ol' green on yellow looks as good as ever.  Interesting note....I still have no idea who this guy is.  There are a lot of cards like this.  I guess they wanted you to scratch the puck to reveal the name.

I really like the design and feel of the back.  My eye is immediately drawn to the card number inside the puck.  I'm a sucker for stuff like that.  But there's also a ton of information including personal bio, complete stats and even a tidbit or two.  I really liked the comic as a kid and still enjoy them (that nostalgia thing is popping back into play).  I prefer them when they are specific to the player though.

Very little in the way of logos and 'mice type'.  Now that I think of it, a logo on the front would have been nice.

I do remember one beef  about the back of these cards as a kid.  The font style they used wasn't consistent throughout the entire set (noticed specifically on the team nickname and position).  It's always bugged me.

Definitely a product for the nostalgic ones or those of you building vintage sets.  Otherwise, you're best off picking up singles.  And when you do pick them up, you'll have to decide - to scratch or not to scratch.

(bonus points to those of you who know the player in the single card photo....here's a hint - he's still in the league).
Posted by bamlinden at 12:04 AM