It's official!  The start of the 2012/13 collecting season will be unlike any other I have ever encountered.  Once again, I will be heading into uncharted territories.

This super-high-end product hosts a tremendous amount of punch.  Rookies, patched, low-numbered parallels, printing plates and jersey tag cards.  In previous years, Linden has appeared in a grand total of one card (a dual tag card featuring him and Roberto Luongo....it went for some solid coin). 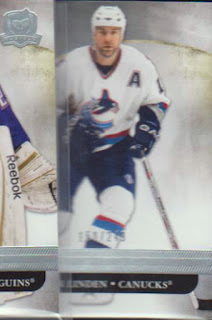 Upper Deck has decided to put him in this year's offering full force.  Here's the lowdown...

And to top it off, 4 different autographed printing plates (each a 1/1)

By my count, that's 18 cards in total to add to the wantlist.  I don't even want to think about how much all of this will cost when it hits the open market.

Realistically, I think I could eventually nail down half to two-thirds of the list, but it's going to take some time or some deep pockets - or both.  And deep pockets is something I don't really have.  I can dip the toe in the deep end once in a while, but I've never dove in.  And I don't know if I'm ready to either.

Labels: Linden Card of the Week, My Collection