I'm glad I spent some time yesterday searching for a way to watch today's film.  It was one of those "must see" titles on my list.  A lot of newly released docs get that automatic moniker nowadays.

I was hoping it would either land in a theatre during our city's film festival or maybe get a special showing (like what happened to The Last Gladiators earlier this month).  Sadly, no dice.

But I did track it down on iTunes (odd that it took me a while to check there....shows you how much I watch movies off of iTunes).  I've never rented one from them but gave it a shot.  It was a lot easier than I had anticipated.

That could be trouble down the road.  :) 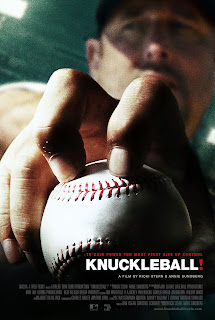 "Knuckleball is the story of a few good men, a handful of pitchers in the entire history of baseball forced to resort to the lowest rung on the credibility ladder in their sport: throwing a ball so slow and unpredictable that no one wants anything to do with it."  (source: official site)

This was a rental via iTunes.  Nice!


The tagline of this movie is "To gain power you must first give up control".  That in a nutshell is the knuckleball.

The start of this film really drew me in.  The first 3 minutes are awesome. Great mood, flow and feel.  The shooting is excellent and unique while the editing is an equal compliment.  A fantastic montage mixed with a sizzling title sequence.  A very nice start.

We start with the other end of the pitching spectrum - the fastballers.  Guys these days can hit mid-100 mph.  A lifetime away from the range a knuckleballer throws.

We are introduced to the fraternity of freaks.  Only about 70 players have ever earned a paycheque in the majors by throwing a knuckleball.  It's a very stylized delivery and most find it a circus pitch.  I'm amazed at how much people constantly discount these guys.

Currently there are only two knuckleballers in the majors - Time Wakefield and R.A. Dickey.  The film follows these two as the main thread while introducing side stories involving other knucklers.

Growing up, Wakefield was using the pitch more for fun.  In fact, he came into the majors as a first baseman and was converted to a pitcher.  In 2011, he was approaching some pretty hefty milestones.

R.A. Dickey was a huge comeback story in 2011.  Constanly moving from team to team, he was signed by the Mets in 2010 as an add-on pitcher.  He was one of the first cuts in 2010.  In the minors, he pitched a near perfect game and was brought up by the parent team.  He was lights out the remainder of the season and earned a starting spot on opening day 2011.

Dickey struggled in that start as a result of a split fingernail (something most would seem so minor was huge to a knuckler.  Wakefield in the meantime was coming out the pen to start the season - often in nothing situations.  He got a start a couple months in and was solid.  Soon after he earned a spot in the starting rotation.

To the masses, the knuckleball is a circus pitch.  Passed balls and stolen bases are the norm with these guys on the mound.  A huge "us vs. the world" feel is hung on these guys as nobody really enbraces a knuckleballer.

We find Wakefield and Dickey meet up with Phil Niekro and Charlie Hough, two past knuckleballers who carried the torch in the 70's and 80's.  They sit around and chat ball.  They all agree that it's the heavy (home run) hitters who are easier to pitch to as opposed to the 'slap' hitters.

We get a bit more of a backstory from R.A..  He won a bronze medal in the 1996 Olympics (at the time he was a conventional pitcher) and was drafted into the big leagues.  Doctors wanted to test out his arm and found an issue with it that made the team withdraw their contract offer.  Dickey was devastated.  He was given a base amount by the team and R.A. took it...trying to walk the long road to the majors.

For most, the knuckleball is an act of desperation.  They 'find' it as a last resort to staying in the bigs.  Only Phil Niekro was drafted as a knucleball pitcher.

Just a note...as much as I'm enjoying the editing in this doc, it's a little too stylized at times.  Sometimes less can be more.

For Wakefield, his backstory shows him being converted from the field.  He went in and pitched a complete game win in his first start.  In 1993, he was named the opening day starter.  He too had a rough season that year (even manager Jim Leyland thought he was a freak show).  He was dropped from the roster for 1994.

Tim was signed by the Red Sox and worked with the Niekro brothers in the minors.  He got his confidence back and was a staple in the big leagues for years.  He was closing in on his 200th win.

For R.A, when he began to struggle it was Orel Hershiser who suggested he turn to the knuckleball.  He worked with Charlie Hough to polish his craft.

We see the low that Wakefield went through in the 2003 ALCS where he went from hero to zero with one pitch (a game winning home run to Aaron Boone in game 7).

Tim struggles in 2011 to get that 200th win.  After 6 attempts, he is dropped from the rotation.  Late in the season, he finally picks up the illustrious victory.  At the end of the season, he retires from pro ball.  Leaving R.A. Dickey as the only one left to throw the knuckleball.

Is the pitch becoming an endangered species?  Will it become extinct?


This doc was an enjoyable watch.  A little all over the place at times and a little thin in content, but still had a lot to offer overall.  The focus of Wakefield and Dickey is the obvious road to take but I would have enjoyed seeing more of the history of the knuckleballers.  Some guys liek Tom Candiotti get very little face time in the film.

The mood and pace of the movie is nice, a little repetitive at times though.  The shooting is solid and the editing is really nice (as mentioned...a little too much at times).  Some great use of archive material (both photos and video) is utilized.  They went in to the vault with purpose.

The story is where I noticed the biggest downside for me.  I think the doc covers some good topics and I like that both Wakefield and Dickey's families are a part of the film, but the heavy focus on those two makes the lack of other pitchers noticeable.  I think a little more on the history of the pitch would have been nice.

If you're a fan of Dickey or Wakefield, this is your doc.  An enjoyable watch for any baseball fan and a good story in general.