I went to the local monthly card show last weekend with the hopes of picking up a couple new Trevor Linden cards recently released.  Sadly, I think a number of sellers had second thoughts about opening up some of Panini's latest offering 'Classics'.  Me thinks the price point is the culprit.

Anyways, what would have been a very quiet show was momentarily interrupted when I saw a discount box with some nice patch cards in it.

And since I'm a sucker for a good deal, I decided to justify a bit of a purchase to add some cards to the tradebox.  That....and I won the monthly poker game the night before.  So I had a few extra bucks in hand at the show (can't let it go to waste right?). 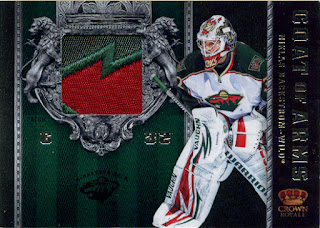 This patch really pops out of the card.  Backstrom gets little hobby love it seems.  I find that odd.  I would have thought there's be a bit of a following based on his nationality (Finnish) as well as some of the phenomenal patches coming from Minnesota Wild jerseys. 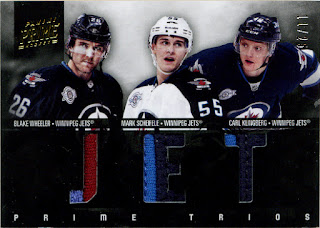 The guys on the side were throw-ins.  It's the dude in the middle that made me pick up this piece.  Mark Scheifele has a great shot to really showcase his talents at the upcoming World Junior tournament.  A solid performance will really help his chances to stick with the big club this year.

I'm anticipating more Scheifele collectors to come out of the woodworks once he is a staple on the Jets. 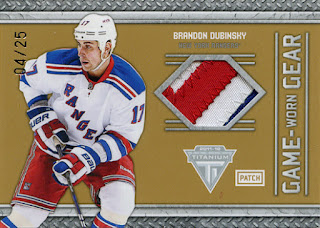 Now, I tend to slag on the Rangers a lot but that's mostly due to one individual (who will remain nameless).

What I can say is they've got the makings of a solid team.  And they've got great looking patch cards.  This Dubinsky is no exception.

And what's better than one Rangers card? 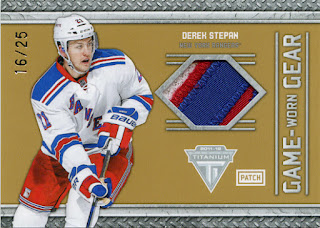 The price on this one was just too good to pass up.  Hopefully I can find a Rangers collector who has some Linden cards to trade.

I think one of the goals over my holiday break is to properly scan and catalog my trade cards.  In the new year I'm going to be a little more aggressive in turning over some of this stuff so I can get a little relief in paying for some Linden cards.

I hear the new year is going to bring some doozies.
Posted by bamlinden at 11:30 PM