LINDEN CARD OF THE WEEK - History In The House

What was supposed to be a nice relaxing week of no work, no holidays, no birthdays and no plans has been anything but.

I made the mistake of answering the phone and giving up some of my vacation time to head into work to put together a last-minute project.  What was sold to me as a "one day job" has drifted into four - and a couple hours Sunday will be the capper.

While I have a tough time saying "no", I almost regret saying "yes".  I've got next to nothing done here at home and a whole list of things to do.  Not how I was planning to start 2013.

Nonetheless, what's done is done.  On to hockey cards.

There was a nice, thick bubble mailer in the mailbox today.  Inside was a card that I've been anticipating ever since I purchased it.  It comes from a very "hotly debated" product and now I can see the goods for myself. 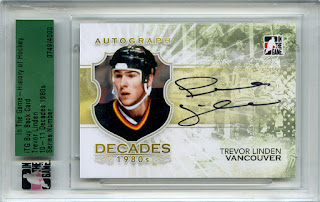 To my knowledge, this is the only copy of this buyback auto made, making it a unique addition to not only my collection but the Linden overall "big picture" Linden collection out there.

A lot of the buyback autos don't really appeal to me.  They come from ITG's early releases (when they had an NHL license) and unslabbed go for very little money on the open market right now.  I've seen one up for auction with an asking price of $45-50.

For me to fork out 30-40x what an unslabbed version goes for just doesn't work for me.  Even if the card is a one-of-a-kind buyback (which some of these are not).  I've been waiting for the price to drop on them, but so far the sellers are holding strong.

So why this Decades 1980s buyback?

As I mentioned, it's the only one in the product.  As well, this card was set up as an old-school auction.....starting at 0.99 cents.  I had a hunch the price would stay low (the product has been getting some volatile reviews).  Sure enough, the final price was less than what an unslabbed version of the card goes for.  That works for me.  Not only that, I really like the Decades autos.  A very sharp looking card (and set).

The product, History of Hockey, is a very unique one in the hockey card world.  It's a high-end price point and each pack contains four slabbed cards.  There's a rookie card (ranging from Joe Schmoe 1980's dude all the way up to Maurice Richard and Bobby Orr.....yes, authentic rookie cards of some of the greats).  There's a buyback auto (where ITG slabs an old ITG auto card and releases it in the product....like my Linden).  There's a slabbed authentic autograph card (where a regular base card is signed by the player pictured....again ranging from guys that we've forgotten about on the fourth line all the way up to the likes of Ken Dryden).  Finally there's an art card (a handpainted card with a piece of memorabilia added....these are the cards that have been holding good value).

Four slabbed cards per pack.  A lot of the pack breaks I've seen have made me cringe....the price point is too much for me to risk potentially getting 2 or 3 cards that might not fetch even $10 on the open market.  That said, if one were to land one of the big fishes in the pond, it would definitely be "pull of a lifetime" material.

For me, I'll stick to the Linden cards in the product.  He has a rc, an authentic auto and a few buyback autos.  And I'm only picking them up if I can get them for a nice price.  This Decades card fit the bill perfectly.