Man this month is going by quick.

From a hobby standpoint it has been a pretty solid one.  Not too busy...not too slow.  I've picked up some nice items for my Linden pc including some beauties I'll be showing off in a moment.  One card was such a surprise to find - it might just be the nicest one I've found locally.

I've been in the habit of going to the library once a week to do some reading (for my '12 in 12' project).  I've even got my niece and nephew involved.....very cool.  I'm right on track to finish the book next week.

I've been working on some of the customs that have been on the plate for far too long.  I'm looking to keep on that this weekend and hopefully can get one or two requests completed 100% over the next couple days.

I've also been scanning my traders - something that has been in dire need of updating.  I've come up with a pretty good routine that makes it not so tedious and not so difficult.  Even more boring than the scanning will be the documenting (I'm not really looking forward to that).

A pretty good start to the year if you ask me.

Three items to show off tonight.  The first comes from a trade - I love getting pc cards this way.  So much more fun than buying them.  It's tougher to trade for a few reasons.  Some Linden cards are very sought after so I can understand when people want to maximize their profit.  Lower-end Lindens are better for trading...but there aren't too many of them out there.

What I've done is purposefully hold off in buying some of these low-end items in the hopes of working out a trade down the road.  Score one for the good guys tonight. 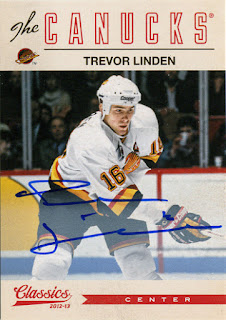 This base parallel auto completes the four card Classics pursuit.  Fun, fairly quick and not too expensive.  Exactly what I'm looking for in a pc chase.

The signature versions of this base card are exactly like their unsigned counterpart say for two things.  The auto (of course) which is hard-signed by the way and the card surface.  The signed cards have a glossier finish to them.

So be sure to check your auto cards from this set before you go buy one.  Having the player sign in person can lead to some unauthentic issues out there.  There is also a line on the back indicating the signed versions. 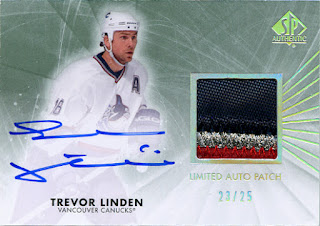 This was a card on the wantlist for a little while.  I had passed over a few copies because of the single color patch (cards this limited should not have a one-color piece of jersey or especially patch in it....period).  I balked on a couple as well because the price was a little higher than I wanted to spend.

Well, my patience had me panicking a bit.  With only 25 copies of the card, the "supply" dried up while my "demand" grew.

When I saw this copy hit ebay, I thought about it for a bit.  The price was right around what I was looking to spend and even better....I knew the seller - a fellow Linden collector.

I contacted him and asked what his rock bottom price was and he shared what he paid for the item.  He said he'd be happy to sell it to me for about that price.  I paused slightly but knew that it was a good pickup.

It didn't take long for the card to arrive and I was pumped to see it.  And let me take a moment to say that it was one of the nicest packing jobs I've seen in a while.  Well protected, well packaged, even the name and address were protected by clear packing tape.  Thanks very much for that.

But it gets better. 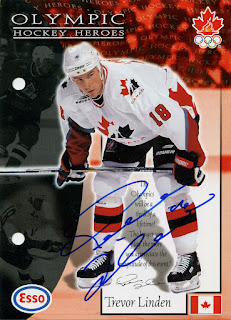 This in-person autographed Esso Olympics card was included as a gift.  Man is it ever nice.  In fact, it's one of the nicest Linden autos I have.

A large surface to sign on and a solid sharpie swirl made this signature tops on the list.

Not much more to say other thank thank you very much Elliot for the kind gift.  It definitely made my day.
Posted by bamlinden at 12:08 AM