LINDEN CARD(s) OF THE WEEK - Recent Pickups And A Retraction

A couple weeks ago I made the bold statement that the Hero base card of Trevor Linden in this year's Heroes & Prospects release was Trev's best base card ever.

I had a chance to check out the 30-card Hero subset recently at the local trade night and was completely disappointed in the drawings used for the players.  A lot of them looked very poor, bordering on "comicbook-ish" (see the Gilbert Perreault) and had me wondering why ITG went with drawings and why they went will such poor renderings.

They've used actual photos in the past showing team logos and everything.  I'm not sure if the lack of an NHL license had anything to do with it, but I was really less than impressed with the effort.

I will be doing a post soon for my 'One Sheet, One Set' project showing off these Hero cards.  You'll get a better sense of them then.

But, since there was a Linden card on the list, I was not going to pass up a chance to pick one up.  In fact, it was a nice gift from one of guys running the trade night.  Thanks Mike. 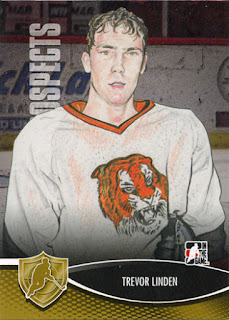 Not gonna say much more other than I hope this is only a one year experiment.  I'd much rather have a photo (even a low quality one) than a drawing of this level. 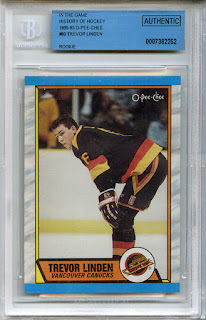 This was a card that popped up on ebay last month and had me contemplating whether or not I should go after it.  Linden rookie cards can be had for under a buck and although this one is slabbed, it's not graded.  So how much does one put a price on it?

For me, it was $10....no more.  To my knowledge, ITG slabbed up 7 copies of this rc for their product.  I'm still not sure what to think of the execution of this product.  So many good things about it, but a lot of down side as well.

Definitely one of the most talked bout products of the year. 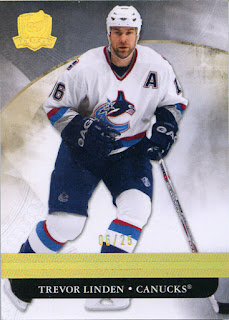 Another one of the daunting Cup checklist.  It's slowly being whittled down but some of these cards are still coming in at a higher price than I would have liked.

This gold parallel is numbered out of just 25.  That's a number than can mena big bucks or a surprisingly good deal.  I'm leaning towards good deal on this one. 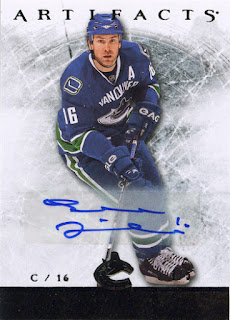 This card was without question the steal of the month.  I was fully expecting a nice high price to hit this card and was thrilled when I ended up paying a third of that.  Maybe even less.

Yes, it's a parallel with black foil and a sticker autograph, but it's a Linden on the checklist and numbered to just 5.  I'm very happy to be crossing it off the list.

I've noticed that the prices on Linden cards have softened considerably over the past couple months.  Sure there are the odd exceptions, but for the most part cards are going for a lot less than they were 6-12 months ago.

Hopefully that trend continues.  He's got a handful of card in Panini's latest offering - Limited and I know that he'll have a big presence in ITG's Decades The 90's coming later this year.
Posted by bamlinden at 10:36 PM