STASHED IN THE CLOSET - More Than Just A Sports Illustrated Magazine

This past weekend I went to a local antique and collectibles show with my mom. It's one we regularly go to (and by regularly I mean "once a year"). It's a fun afternoon and I enjoy the window shopping.

I also go because there is one guy set up in the back corner who has some oddball sports items.  Be it team cards, photo slides, magazines, you name it.  He's also got a nice selection of vintage cards.  I spend a good chunk of my time at his table.

But in rounding the corner and walking up the aisle towards where he is normally set up, I noticed that he wasn't there.  Disappointed, but what can you do.  As I approached closer I realized that his place was taken up by another sports collector - and a long lost face in the hobby crowd in my books.

It was a collector who set up regularly at the monthly card show years ago.  But because he deals mainly in vintage and oddball items, he doesn't set up these days....no real demand for his stuff.

I recognize him immediately and he figures out who I am pretty quick as well.  He asks how my Linden collecting is going and I in turn ask how things are with him.  He tells me something that hit me pretty good - and I'm still thinking about it almost a week later.

He says that a lot of the things he is selling these days comes from a collection of a fellow hobbyist who passed away a little over a year ago.  This hobbyist is someone I knew fairly well in the hobby establishment.  He set up every month at the local show and always had some great vintage items on his tables, a smile and a handshake for me when I walked in and a willingness to share some hockey stories with me.

I can hear him talking about his Montreal Canadiens right now and how they need this and should get that.  I can hear him plugging his new singles strewn out on his table - always changing things up. And I can see the signs he made showcasing some amazing deals....including a drop dead price to buy the whole table's worth.

I used to buy a lot of stuff from him back before my player collecting days.  I was working on sets from the 70's and he had a bunch of stuff.  It was nice looking and priced to sell.

A number of years ago he decided to quit doing the shows and I have missed his character there ever since.

One of the last items I ever purchased from him was this great looking magazine. 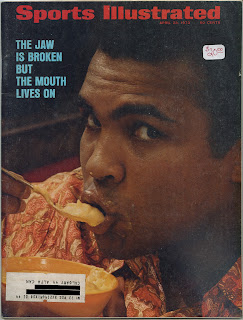 I found it in a Rubbermaid container right where I left it - price tag and all.  His writing and everything.

So what's the connection to this Sports Illustrated issue?  Well it was the edition that was on the racks the day I was born.  I thought it was a cool item to pick up for that reason.

I have since tracked down and purchased a copy of The Hockey News from the same time period.

This magazine had some significance before this past weekend but now it holds even more.  Every time I look at it from now on I will remember a part of my hobby collecting days that I hold near and dear to my heart.  I will be reminded of someone who saw the hobby as something to enjoy and share with others.  That's something I have been and will continue to carry with me forever.

Thanks Dale, and may you rest in peace.
Posted by bamlinden at 8:08 AM