BEHIND THE MASKS - Masked Men 5

In The Game recently released the 2012/13 edition of one of my all-time favourite sets - Between The Pipes.  I normally bust a box of the product (I'll share that another time) with the goalie mask cards being the highlight (and pursuit).

This year's offering is a little different than past sets and I think the changes are an improvement.  I picked up a handful of Masked Men 5 cards at the Toronto Expo and so I'll let the show & tell do all the talking. 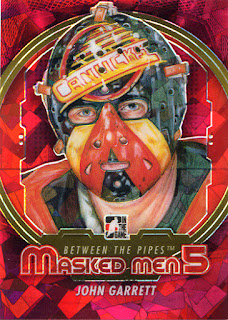 John Garrett.  This mask immediately shoots me back to the early 80's.  It's the mask on one of my favourite OPC cards from the era and it is also a huge reminder of the infamous All-Star Game in which Garrett was the replacement for Richard Brodeur.  He was on his way to winning the MVP (and a new car) until some guy named Wayne decided to pot four goals in the third. 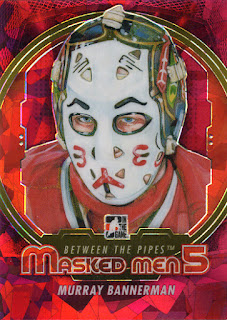 Murray Bannerman.  Notice anything about these cards?  That's right....not photos, but artist sketches.  Paul Madden (the same guy who did some work on the Enforcers product as well as Sportkings to name a few) has done some stunning work.  These sketches are bang on capturing the expression and character in each of the player's faces and masks.  An amazing feat if you ask me. 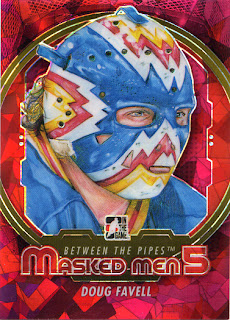 Doug Favell.  Love this Rockies mask.  The crispness of the sketches is far superior than the sometimes blurry photo zoom in that plagued previous releases.  Check the base cards if you want a good example of that. 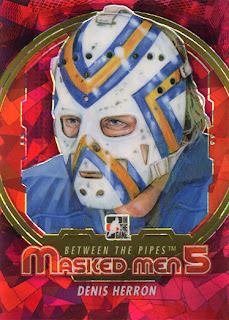 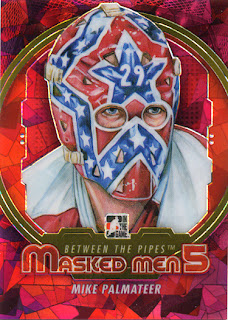 Mike Palmateer.  Case in point.  This is another of my faves.  So simple, but so cool.  Best ever Washington mask if you ask me.  It's a 50-card set and this year it's all current or past goalies.  No junior or AHL players.  No offense to those guys, but I like my goalie mask sets to be pros only.  In fact, if it were up to me.....it'd be vintage all the way. 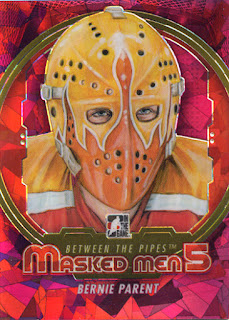 Bernie Parent.  One of the few non-NHL masks.  Anybody know what team Bernie was playing for when he donned this classic lid?  Shouldn't be too tough (if you're over say 35 years of age). 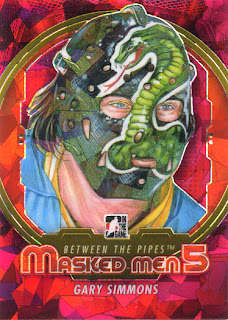 Gary Simmons.  Sweet!  The cobra mask is another that gets top billing in my book.  I love that the mask doesn't match one bit with his Golden Seals jersey color.  Why should he change it......it's just too awesome. 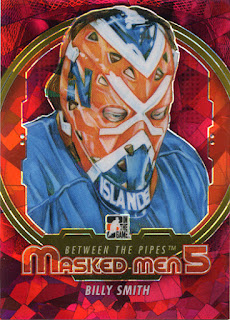 Billy Smith.  Most of us remember him wearing his helmet and cage from his Stanley Cup winning days, but before he became the go to goalie in the playoffs, Billy wore this cool mask.  The long chin and unique throat guard makes this a keeper. 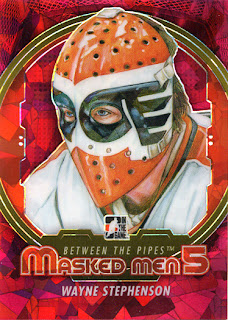 The red background has some funky refracting shiny goodness to it and there is a slight embossing to the mask sketch itself.  One wouldn't think that it would all come together and work - but it does.....in spades.  A really solid looking card (and they scan well too).


There were a couple more mask cards I picked up (with a certain Habs collector in mind). 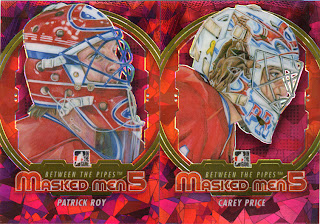 Nice and nice.  One has since been traded away while the other stays in the pc (he had it already).  I've also added a few more from my box break, made a couple trades and as a result.....the wantlist is different.  But I just needed to share these goodies.  I think they look fantastic.
Posted by bamlinden at 12:13 AM