Just a quick post tonight to show off a card I traded for a couple nights ago at the monthly trade night.

I had been sitting on a Martin Brodeur Artifacts parallel /10 for a while and a Brodeur collector just happened to notice it.  He asked if we could work something out.

After taking a look through his traders, I found a couple cards that piqued my interest.  One (which was more of a throw in) has already been packaged up and will be mailed off to a collector of the player.  The other card I thought was pretty cool. 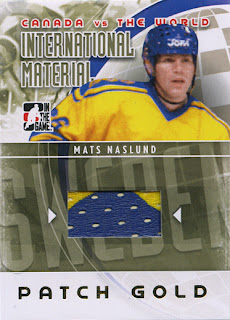 First off, it's a 1/1.  Second, it's of a player that I used to follow a lot when I was a kid first getting into hockey and hockey cards.  Mats Naslund (and later Hakan Loob) were those highly skilled, speedy guys who lacked in size, but still showed that success could be had with hard work.

Lastly, I liked this piece because the "patch" is from a game-worn Sweden jersey.  I put patch in quotes because there's really no seams in the jersey.  It's more like a jersey piece.  But I'm assuming that Sweden jerseys from that era had painted on logos and such.  It was just a basic mesh.

I'm not sure what kind of hobby love Mats has and I really don't know if the card will give me as much of a return as the Brodeur would have, but sometimes it's better to have a card that is appealing (especially to me) than one that will just bring in the top dollar.

I'm quite happy to have this one in the trade box.
Posted by bamlinden at 7:57 PM