Work, work, work.  It's been my focus over the past month.  Not coming as a surprise (as every June/July is this way), I've come to enjoy it in some morbid way.  It's a challenge for me (and the rest of the team that I work with) to raise the bar each year and exceed previous standards.

I've missed out on a few things unfortunately as a result of my work.  Some playoff hockey, a couple trade nights/shows, a few of my niece's ball games and my nephew's lacrosse matches but I seem to find a way to fit some of it in.  Tonight was another example of just that.

The monthly trade night reared its ugly head and I was more than ready to make the trek out to enjoy en evening of cardboard fun.  Upper Deck recently released its SP Authentic brand and I was happy to see that my guy is in for 5 cards.  A base, base auto parallel, a retro base, a retro base auto parallel and a patch auto /10.  A nice mixture of easy to track down cards, some tougher pulls and a longshot.  That's what I like to see in a set.

But wouldn't you know it, out of all the pack wars and box breaks, not a single Linden could be found.  I was sure he'd be a short print or something....but alas no.  He's in the main set, just bad luck.

That was until I noticed a box full of base that the shop owner had on the counter.  I asked if I could peruse and was quickly rewarded with this little gem. 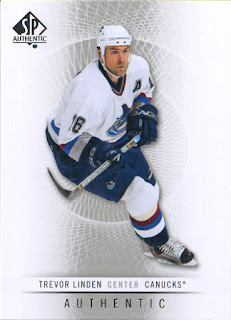 Yes it's a simple base card (both figuratively and literally) and yes it's probably not tough to track down.  And it most definitely not going to create a dent in the ol' pocketbook (in fact, the shop owner was nice enough to let me have it for nothing.....much thanks).

But what this card represents is the enjoyment I feel when I track down a card on the wantlist, being able to find it and obtain it.  It's just as much fun to cross this one off the list as a number of other cards.

Now as for the card itself, well it's par for the SP Authentic course.  Simple, uninviting, bordering on boring.  The photo selection lacks any sort of excitement and frankly is one of the less desirable "I'm making a turn" pics.  I don't know what kind of photo pool UD has to choose from, but you gotta think there are a number of better shots out there.

Still, it's found a home and is another one off the list.
Posted by bamlinden at 1:04 AM