MY COLLECTION - Some Recent Vintage

For me, vintage is anything pre-Gretzky rookie year.  I was introduced to the world of hockey cards in 1980 (I missed the Gretzky RC by one little year) and I've always considered those cards to be "of my era".  And there's no way that I'm vintage.

But over the past decade there have been many cards released featuring players from the 20's, 30's on up through the 70's.  Some even have pieces of memorabilia.

As cool as these cards are....they are not vintage to me.

But at the show last weekend, I couldn't help but pick up a couple (same guy that had the Parkies). 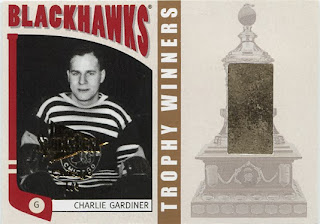 I know this card is a show card, but that piece of pad is legit.  To grab an old piece of leather like that for under $10 was an easy decision for me.

There are only so many pieces that can come from guys who played in the 30's.  I have no doubt that this card won't be declining in value any time soon. 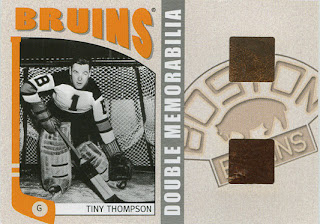 This card is not the show version.  One piece is pad and one is glove....can you tell which is which?  Neither can I.

I really like the design of this set.  The base cards, the memorabilia, the autos.  And the photo used on this card is a great shot from the 30's.  Take a moment to let that sink in.  Game used memorabilia from 80 years ago.

And no....I'm starting up any new projects with these pickups.  These cards were just too good to pass up.  Hopefully I'll be able to trade them for some pc cards.  A Linden or two would be nice.
Posted by bamlinden at 11:09 PM