LINDEN 'TOUGHIE' SURFACES - And I'm On The Fence

Last year, In The Game released the sequel to their popular (and somewhat controversial) Enforcers product.  A lineup solely of tough guys.  Fighters, goons, whatever you may call them.

This niche product definitely caught the eye of a certain hockey audience and even those who might not lean towards those players too.  Heck, I ended up buying a box myself.  It was a fun break and I really liked what ITG did with their autograph cards.  They do a great job of incorporating the sticker autos into the design of their cards.

Enforcers II wasn't really on my radar when I first heard of its impending release.  Once around the block was good enough for me.  Especially knowing that my guy would never be included in an enforcers set.

Yeah.  A little digging through the checklist revealed that Linden would have a card in Enforcers II.  And not just a simple base card or auto.  How's a Duel Tough Patch suit ya?

The Duel Tough Patch card (in my eyes) represents two players that have a connection in the enforcers world of the NHL.  Two guys that have dropped the mitts, toe to toe.  Epic battles.

Potvin vs. Hextall (yup....they're in there)

But not Linden vs. Witt

I've seen a few of these cards pop up on ebay and the hobby boards and there is no question that they look great.  But I just couldn't wrap my head around the idea that Trevor Linden (good for about 35-40 PIMs per season, never drops the gloves...and when he does - it ain't pretty) would have a card in this set. 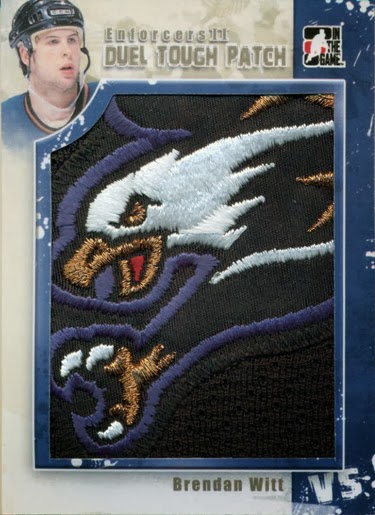 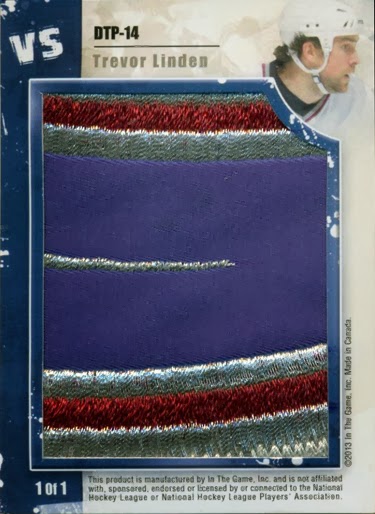 For a card like this to truly shine in my eyes, the patch has to be more than just average.

Yes, there are numerous breaks in the patch.  Yes, there are multiple colors.  But the detail and uniqueness of the patch isn't there in my eyes.  It's not instantly recognizable as to what the patch is or where it comes from on the crest.  It falls short.

So there it is.  The card exists, it's been pulled from a pack and in fact - it was presented to me with the opportunity to buy.  What to do?

Was the asking price fair?  Sure.....I guess.  I dunno.  With 1/1 cards, it's hard to gauge the demand.  I'll admit, when I first heard that Linden had this card in Enforcers II, I wasn't thrilled.  I felt he was included in the product not because he was an enforcer....but because his name was Trevor Linden.  And Linden cards sell.

So the desirability factor was lower than normal.  I decided to pass on the card.  I know where it currently lives.  And if down the road I change my mind, maybe I'll still have a shot at it.

But if I never land this piece, it'll be one of many that will never hit my collection.  And I'm ok with that. 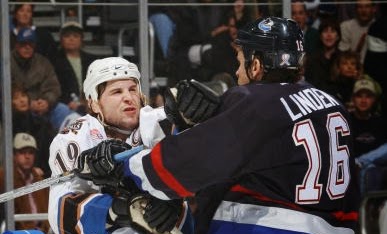 Oh, and by the way.....here's the photo that was referenced from the "fight" between the two guys on the card.  It was 2002, neither combatant dropped the gloves and neither was given a penalty on the play.