LINDEN CARD(s) OF THE WEEK - Some ITG Silver Linings

With In The Game's newest offering coming out this past week, I knew it would only be a matter of time before a few new cards would be added to the collection.

The big question was "Which ones?" and "When?"

With a name like In The Game Used, one can quickly deduce that all of the cards on the wantlist are of the game used variety.  And there are parallels as well.  The silver versions run between 30 and 60 copies while the golds are out of 10.

There's also another dreaded Nameplate (it's a Montreal jersey...looks good) and one other 1/1.  So the wave of cards hitting the open market will be quick and beefy.

Which is why my attitude towards a lot of the cards on the wantlist has changed from years past.  No longer am I chasing copies of anything and everything I need.  I have to be selective.  If I'm not - I'm busting the bank...simple as that.

So when I see silver versions /60, I just yawn.  Why chase those when the odds are good that they'll be around months from now - and at cheaper prices.

That's what I'm doing with the Decades 90s product.  Only now am I chasing some of the "lower end" Lindens in the release.

I wasn't even planning on putting the new silver jersey cards from In The Game Used on my radar, but a chance e-mail changed my mind.  I received a message from another local collector who opened a lot of the product.  He knew I collected Linden and showed me the Trev's he pulled.

I initially told him that I was going to pass.  The prices I'd be looking at spending would be less than what he could get currently on the open market.  He told me to fire an offer at him..."Cash is king".  That's true.  So I did.

And here's what I picked up. 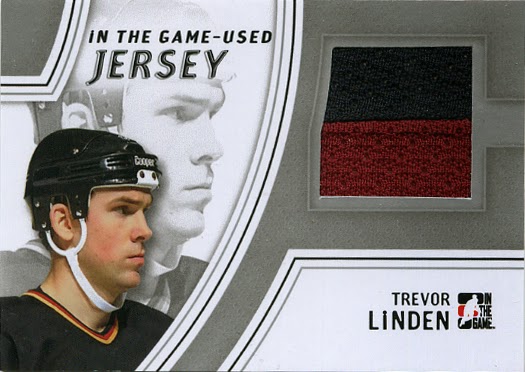 In The Game Used Jersey
Silver (limited to 50 copies)

This card has a nice two-color piece with a thick seam.  Out of the 50 copies available, I'd say this looks will be the best of the lot.

A bit of empty space on the card design for my liking.  But I do believe that it's a new photo used.  That's always nice.  The jersey piece doesn't match the photo though.  Points lost.  :) 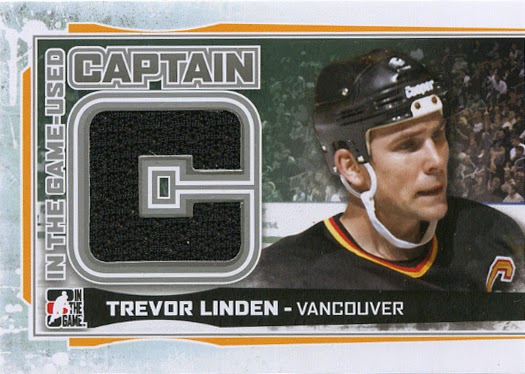 A little more scarce...but still not rare enough to really make me throw a lot of money towards.

I like the design of this.  I wonder if it's a generic crowd in the background or if there is some Vancouver significance? 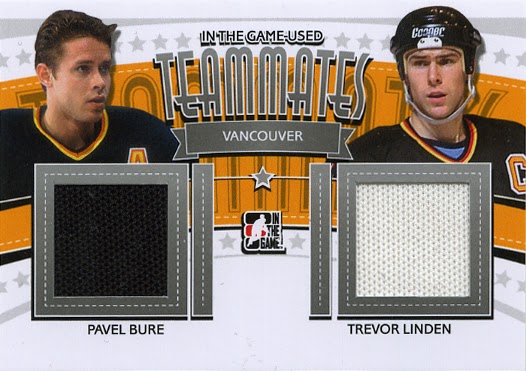 The Linden is a white swatch and another card of 60 copies.  Nothing overly desirable here....except that it was for the right price, it was a local pickup and I paid in cdn currency. 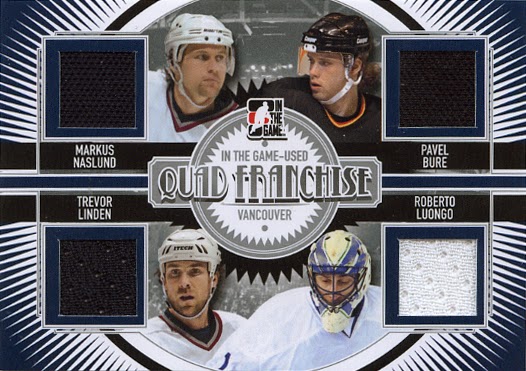 Yup.  Four guys, a theme and some jerseys.

Coming this fall on CBS. 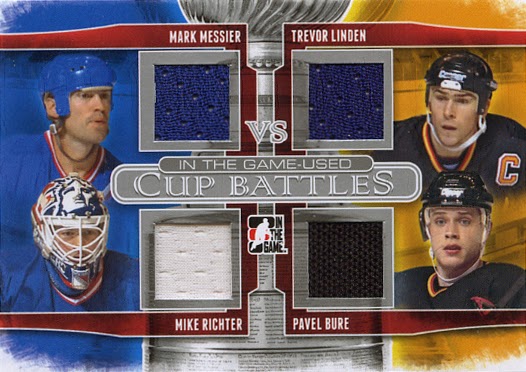 If there was one card that was the real "steal" of the bunch it might be this one.  It looks like it's the higher demand card on ebay....but let's see where the bidding sits after a couple months.  That's when I would have started to chase this copy if it hadn't come available this weekend.

Overall, I am really happy with my pickups.  Anytime I can buy locally it's a good thing.  Like groceries.....home grown is better.  Supports the economy.  Things like that.

I think I paid a fair price (I know it was a price I was firm on) and I also think that down the road these prices will look good for the seller too.  I told him that's it's a tougher go with the Linden collecting these days with all the cards out there.  Lots to choose from and a lot of low-numbered stuff.  So the key is "choice".

Now the question becomes "Who's next?"
Posted by bamlinden at 12:48 PM