Do you think Roberto is happy to be out of the disaster zone known as Vancouver right now?  Judging by the shutout he pitched in his first game as a Panther....I'd say so.

It's rare these days to see a goalie return to a team for a second stint in net.  Even more rare is when said goalie pulls out a goalie mask from the past.  But that's just what Roberto did when he hit the ice against the Sabres last week.

So I thought I'd take a moment to bask in the glory of the ol' Pink Panther mask and a time when the Canucks were a bit better team. 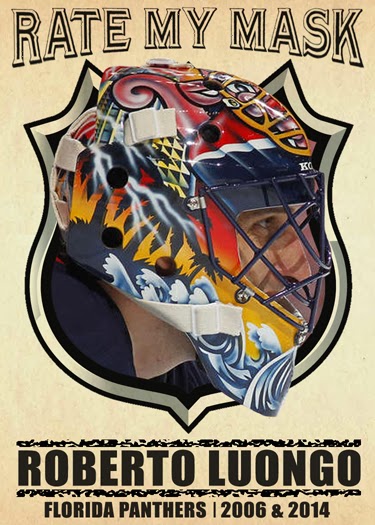 Lots of color, lots of images, lots of Florida and panthers going on here.  Roberto's mask parallels his own character of fun and "easy-going.....ness".

Roberto's mask designer of choice for the past decade or so has been Canadian Marlene Ross.  She was responsible not just for this Florida "Pink Panther" mask, but his Panther-inspired Olympic mask from 2006.  She also designed numerous Vancouver masks as well as his 2010 gold-medal winning lid.

She has been featured on Hockey Night In Canada a few times and has a solid pro clientele......or should I say "had".  Many of the goalies listed on her website have retired....so I'm not sure how much recent work she has going on. 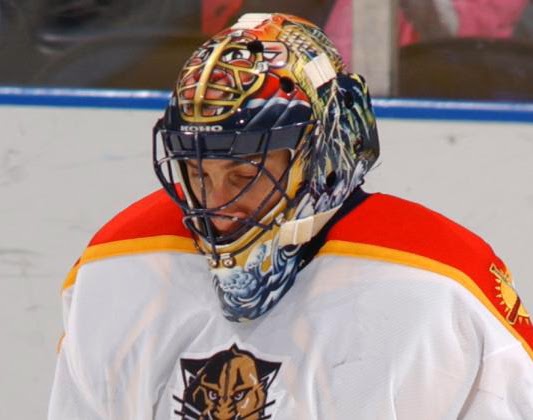 The focus of the mask is most definitely the iconic image of the Pink Panther donning a vintage pretzel mask.  The cartoon is a little more aggressive than the cuddly Saturday morning / comic book offering but I like it.  I don't think a cuddly plush toy would work nearly as well on an NHL goalie mask.

Silhouette palm trees and crashing waves drape down each side of the mask which uses a gradient base of warm colors as a perfect background palette.  The contrasting blues down low and around the chin really pop out. 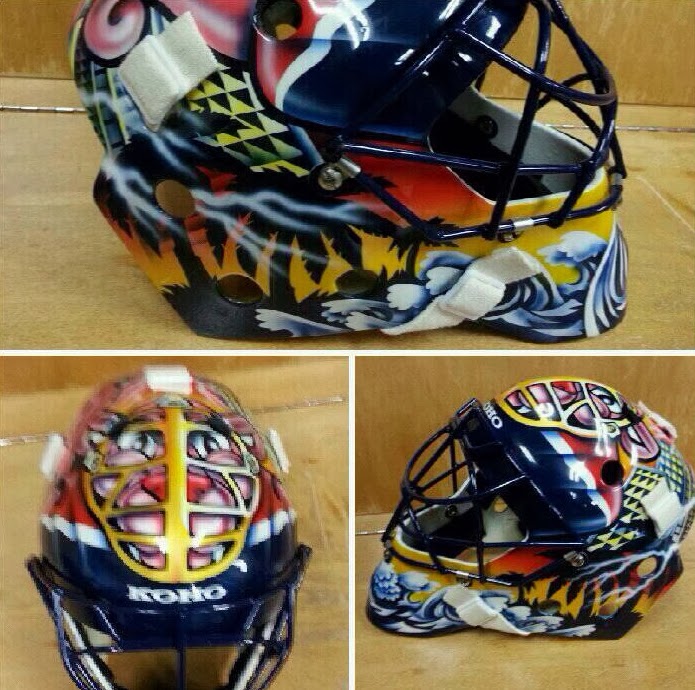 I'm still trying to figure out what those yellow and black triangles are on each side.  Is it beachfront property?  An homage to a mask from the past?  Or just simply a geometric pattern to fill space?  I have no clue...so I will go with beachfront property.

The backplate of his mask (at least back in 2006) had some initials on it.  When asked years ago about it, Roberto simply responded with "It's personal".  I can respect that.

Overall, Luongo's lid blends character and team about as well as you can.  I would have liked to have seen a little more personalization (as opposed to just a fun figurehead) or maybe even an update of some sort.  Who knows, maybe that'll come later this season or early next. 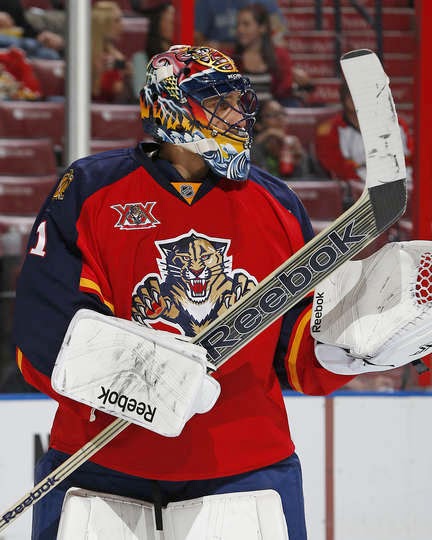 I gotta say, seeing Luongo in the new-old Florida getup is great.  Hearing him at the press conference to announce his return, he seems very happy about returning to a place he calls home (and I'm sure getting out of the situation in Vancouver).

I think he's been very professional about the whole situation over the past three years.  Sure, there have been times where he's shown his disappointment and has thrown out a humorous jab or two, but the flip-flopping of what Roberto's expectation was to be for Vancouver made a lot of coaches and head office folks looks bad - REALLY BAD.

But that chapter is now over.  Luongo is starting fresh (say for a stinky 8-year-old mask) and I'm looking forward to see what both teams do moving forward.

Now it's your turn to RATE MY MASK!
Posted by bamlinden at 7:47 AM