The weekend of The Card Show is here.  It's debut last November was a huge success and the weeks leading up to this spring's offering was even greater.  More tables, more dealers and more cards.

I had a fantastic first day at the event.  Some solid Linden pickups (which will be shown off soon), some excellent adds to the HOF auto pc (I love trading) and I even had some change left in the wallet for some Parkies.

My 51/52 Parkhurst project is something of a "career quest".  I by no means am aggressively pursuing cards for this side collection but when they present themselves at a show for the right price...I'll pick up a few.

And I felt that the stars were aligned to do just that.  So let's see who I picked up. 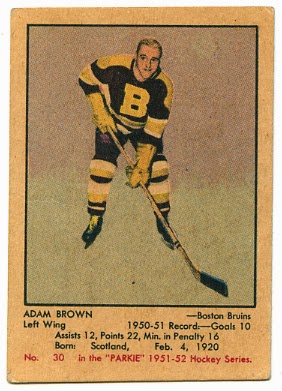 He plays for Boston.

Ok...just kidding.  But the name Adam Brown does not bring back vintage memories.

Nicknamed "The Flying Scotsman", Adam had a 10-year career in the NHL playing with three different teams.  A Stanley Cup winner in 1943 with the Red Wings, it was only his final season in which he suited up for the Bruins.

I wonder how many players back in the 50's were born outside of North America.  It's neat seeing a birthplace of Scotland.  I'd guess it to be a rarity.

The card itself has some beautiful centering.  And the corners are very strong - one of the best in my small but growing collection.  It's a little miscut in the sense that it isn't square, but I think that's just the way it was back then.  Remember....these cards are old.

The bold B on the front of the jersey is definitely old school and the colors (albeit two tone) look bold.  A very nice add for the price. 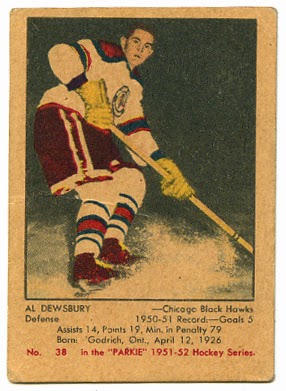 Yes, it's another name that does not ring a bell.  But I'm all about doing a little interwebs searching.

Imagine for a second....he played (and won a Cup) with Gordie Howe, Ted Lindsay, the list goes on.  That would be an incredible story in itself.

He was always a reliable and durable defenceman.  I wonder why his NHL career was so short (or what I would consider to be short).  Did players in that era have long 20-year careers back then?

The card is a little weaker on the corners (but way more than acceptable for me) and the colors don't seem as impressive.  In fact, his pants look a little red.  What up with that?

Very nice centering round out this great addition to the collection.  And again, the price was right. 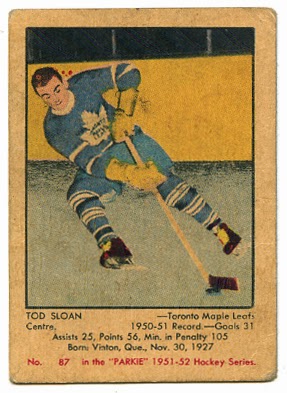 Aloysius Martin "Tod" Sloan had a slightly longer NHL career (14 years) mostly with the Toronto squad.  He was a member of three Stanley Cup winners ('49 and '51 with Toronto and '61 with Chicago) and played in three All-Star games.

An interesting note about the 1949 season for Sloan, he appeared in 29 regular season games but did not make an appearance in the playoffs.  As a result, his name was not etched into the Stanley Cup.  He was included though on the 1949 Maple Leaf team picture (nice booby prize).

He was a speedy center (5'10" and 171lbs) with some hands apparently.  He hit the 20 goal mark 5 times and finished his NHL career with 220 goals and 482 points.  He liked to agitate as well racking up 100+ pims on three separate occasions.

This card has the best action shot of the three with an actual rink in the background.  Much like the Dewsbury, the corners are a little soft but the centering is there (which is huge for me).  Some good blue tones and impressive detail on the jersey make this a keeper.

Overall, these three cards are perfect for the set I am building.  I'm not looking for the highest of high-end, I just want some cards that I can enjoy looking at and appreciate for their age and condition.

And of course, the prices are right.