It's been nearly three months since I last posted and I can't believe how fast the summer has come and gone.  I knew it was going to happen since the summer months are by far the busiest at work.

Last Sunday was the end of a hectic season at work and now it's the quick sprint to Christmas.  Yes...it's true - it'll be here soon.

So what did I do during my hiatus from the hobby?  Well, other than work there was the odd round of golf (one of my better years in a while).  I've caught up with some friends, spent some time with my niece and nephew and just really took advantage of my down time.

I've watched a number of solid sport docs and am still on the lookout for more.  Reading was a little lighter than I wanted.  Still trying to finished my latest book (it's been a few weeks since I turned a page).  That said, I went to the library today and on a whim took out the next book I'm going to read.  Seems like this time of year is a popular one for new releases.

Listened to some new music, bought a few cd's (yes...I still buy cd's) and even managed a concert.  Overall, I just wanted to enjoy the things I like.

Which is why it was a little tough to stay completely away from the sportscard hobby.

I was good for the first 6 weeks or so.  No real anxious twitches to search ebay or lurk on the hobby boards.  But around the end of July I decided to do a quick Linden search on ebay...just to see what all was new out there.  To my surprise - very little.  Just one new card (numbered to 499). The hiatus timed perfectly with a Linden lull in the hobby.

My "one time" search lasted about a week until I searched again.  Then a couple days later.  Then....

Let me begin this story by saying that my Linden wantlist is organized chronologically (the earliest card at the top and the newest releases at the bottom).  Those cards near the top of my page have been there for a while.  Some well over a decade.

Wouldn't you know it....the card that popped up on ebay was the first card on my list.  A 15-year-old card that I have never seen a copy of.  Until I decide to go on hiatus.

Well....that went out the window pretty quickly.  I made the decision to bid and bid big.  To my enjoyment...the card went for less than half what I was willing to pay.  I was thrilled.

The card arrived about a week later and I can say that I had zero remorse about going back on my hiatus. 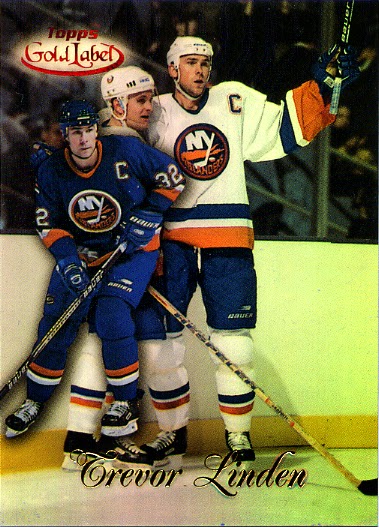 The first year of Topps Gold Label holds a special place in my heart.  It's the product that ruined my dream of owning one of every copy of a Linden card in existence (there are 9 different 1/1 cards) but it did supply me with my first ever 1/1 Linden.

I have been on the lookout for this card year after year and have never seen it.  With only 25 copies, I was reserved to the fact that I'd never cross it off my list. 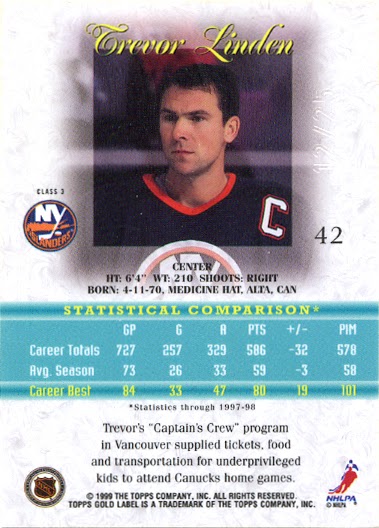 You can see the faint embossing of the serial number along the right side (12/25).  There are three different color levels (gold, black, red) and each color has three "classes" (one, two and three).  And then each of the nine cards has a 1/1 version.  Back in 1998, I hated this concept.  To be honest, I still do.

But other than the 1/1's, this Class 3 Red is the rarest in the product, and clearly the toughest to find.

So after grabbing this gem, I decided to take a closer look at the Linden cards on ebay.  I did cave and buy two more....the prices were just too good to pass on.  But you know what - that's it.

Three Linden cards.  That's all I've picked up since completing the Nameplate in June.  I'd say that's a pretty successful hiatus.

But with any good hiatus, the return can be equally as fun.  So stay tuned as I've got a few goodies to show off and a special surprise for one lucky reader.

I hope you all had a great summer!
Posted by bamlinden at 11:46 PM