HHOF AUTOS - Someone Was Left On The Desk

My desk isn't too messy right now, but that's not to say there aren't a few pieces of cardboard sitting around.  This morning is a good time to work on a bit of a tidy.

Early in the spring I spent a bit of time scanning in a few of my traders.  I figured it was about time I try a little harder to turn cards I don't want into ones I do.

I've sold a few and have managed to trade for a few.  Some went right back into the trade box, but a few have been added to my projects.

This latest addition to my Hall Of Fame autos is one such card. 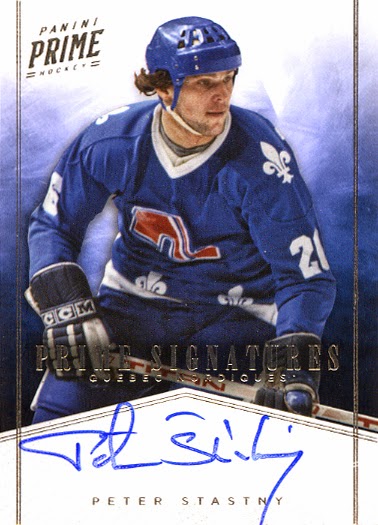 Peter Stastny will unfortunately always play second fiddle to the explosive Oilers of the early 80's, but there is no doubt that his contribution to the game is massive.

He (and his brothers Marian and Anton) brought a level of excitement to the Quebec Nordiques shortly after the WHA/NHL merger never before seen.

He was the first rookie in NHL history to collect over 100 points in his rookie season (Gretzky had 137 in his first year in the NHL but was not considered a rookie due to his play in the WHA), is one of four players to record 1000 or more points in the decade of the 80's (only outscored by Gretzky) and was the 4th fastest to score 1000 points (682 GP).

He also spent time with the New Jersey Devils and St. Louis Blues and finished his HOF career with 1239 points in less than 100 games played.

He was also involved in the first IIHF event for Slovakia when the team competed in the 1994 Lillehammer Olympics.  They finished a very respectable 6th (tying the eventual gold medal winners Sweden and beating the silver medal winning Canadian team in round robin play).

He retired from the NHL in 1995 and since 2004 has served as a Member of the European Parliament for Slovakia.

Always outspoken and honest with his comments, Peter Stastny remains one of the top players in my mind from my childhood.  I discovered the NHL in the early 80's and guys like Bossy, Gretzky and Stastny were paramount in my excitement towards the game.

And you can't deny how slick those Nordiques jerseys looked (this coming from a Canucks' sweater lover).

The card I traded for is from a great set put out by Panini....Prime.  Their Prime Signatures cards are very popular.  Too bad they couldn't prep the cards properly.  The marker bubbling is a definite turnoff.

But I decided to pick it up anyways.  I'll keep it in the collection for a while and then eventually upgrade it.

He does have a nice looking signature though.


Current Collection - 60 HOF cards
Posted by bamlinden at 1:12 AM