It's been nearly a year since I undertook my '12 in 12' project.  Twelve sports books over the span of a year - one a month.

It got me back into reading and I've been on the hunt for more titles ever since.

I still like to flip the pages, but the amount has slowed down over the past year.  That said, it's that time of year for a number of new titles to hit the shelves...so I might be gearing back up for a little more bookworming.

I just finished a good book that Captain Canuck loaned me.  It's on NASCAR legend Darrell Waltrip.  It's called DW: A Lifetime Going Around In Circles.

I'm not a NASCAR guy, but I found this read really fun.  DW is a guy who comes across as confident, arrogant (at times), competitive and wore his emotions on his sleeve.  When reading the book I felt like I could hear him saying the words.  It felt authentic.

He had some really good stories about the sport and his personal life.  I think I enjoyed the book more because it was talking from an era when I was a kid.  He was at his peak in the late-80's so I would have been knee deep in sports at the time.

If you are looking for a good read....check it out.  Ive also got a review on Goodreads about it (if you want to follow my page-turning escapades).


But now, I've turned the page and am starting another book.  One that I have been anticipating for a number of months....and for a few reasons. 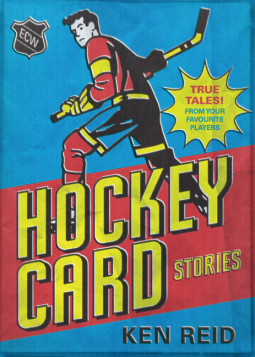 Hockey Card Stories: True Tales From Your Favourite Players reeks of what I love about this hobby.  Hockey cards, hockey card stories, the 80's, goalie masks, journeymen, you name it.

And to add to the interest.....I used to work with the author.  Ken Reid is an anchor on Sportsnet here in Canada, but when he was first starting out in the television industry we worked together here where I live.  He was a news writer and I an editor.  He moved on to sports anchoring and the rest is history.

I had originally thought that this book was coming out at the start of October.  I decided to do the pre-order thing (long story), so I was patiently waiting for the e-mail that it had arrived.  I get my books sent to the store (again...long story).

So I was waiting patiently and then noticed on my credit card statement that my account was charged for the book.  But I had no e-mail.

So I contacted the store and sure enough....they had it in.  They had it sitting there for nearly 3 weeks.  Arrrgh!!!  Regardless, the book was now mine.

Now I flipped through the pages quickly to see what I was in for and I'm excited.  Pictures and short, concise stories - fresh from the players' mouths.  Looks fun!

So I'm sitting back and starting it tonight.

If you're looking for a hobby-related read....I'd go for this one (even though I haven't read a word of it yet).

But if you'd like a little more info, here is an interview Ken did with the Toronto Star talking about his book.  There's also a Beckett podcast where Ken chats up the book with fellow author Stephen Laroche.  Check it out (Episode 10/2/14 at about the 20:55 mark).