Before I start my blog post tonight, I'd like to share the newest ESPN 30 for 30 short film I just finished watching.  It's a great story that is certainly appropriate on a day like today.

I had heard about Sidd Finch but really didn't know the whole story until now.  I don't know if it's possible to pull something like that off today with social media what it is and a lot more cynical and skeptical audience in the world of sports.

As I finished watching that video, I took a look at the scans for my opinion post.  It made me think that maybe I'm being hit with a bad April Fool's Day joke. 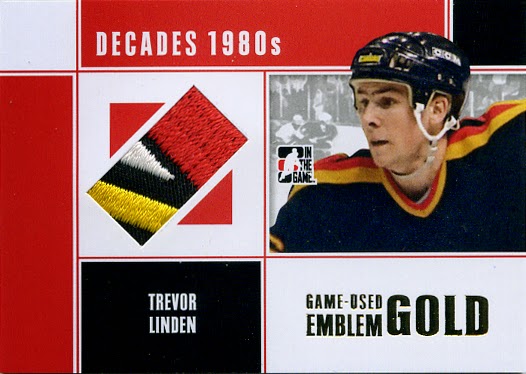 This In The Game Emblem Gold card is a pack inserted 1/1. It comes from the 2010/11 ITG product Decades 80s.  I was excited when this product came out five years ago as it really upped the Linden chase for me.  Three different tiers of cards (jerseys, numbers and emblems) along with three levels (black, silver and gold).  Nine different combinations.

And it took a long time and some definite help from fellow Linden collectors.....but I managed to get 'em all.  And I've got the only set of nine.

I wish the story ended there, but it doesn't.  In fact, the story expanded immediately after the product was released. 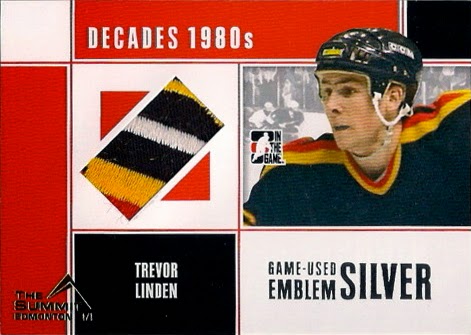 I was in Edmonton for the Summit II show as it had been a while since Alberta had seen a huge card show.  I went also because of Decades 80s.  ITG were set up and had special redemption 1/1 cards stamped for the occasion.  Buy a box, get a random card.  I bought 4 boxes but didn't hit a Linden.

What I did do when I got home is alter my wantlist.  I had to add nine more cards.  Unfortunately, there is no firm data indicating that each of the Linden variations were handed out that day.  I have no idea if they are out in collector's hands, still sitting in a box in the ITG archives or destroyed altogether.

So I had to change the way I chased and documented these new adds.  Until I confirm with my own eyes the existence of a card....it doesn't go on the list. 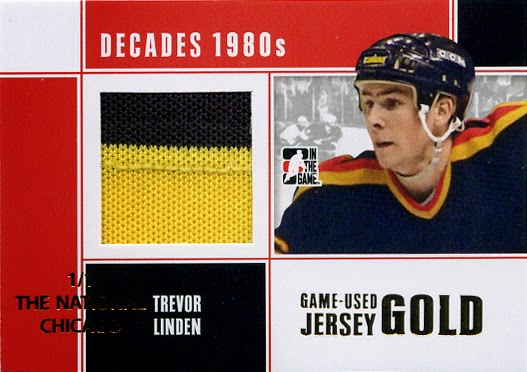 Not long after, The National in Chicago had a similar promotion....and similar looking cards.

Once again, I added to the wantlist....this time with a little more of a disgruntled approach.  From 9 to 18 and now 27.  Nothing new in terms of aesthetics.....just some gold foil stamps.

If only it ended there.

For a few years, Decades 80s bore no rumblings in the hobby world.  That was until the recent merge/acquisition of ITG with Leaf.  The question became "What to do with all this extra stock?" 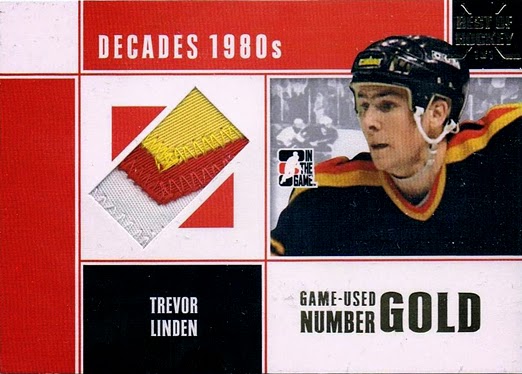 Well, I guess you put it in a product called "Best Of Hockey" (the stamp is in the upper right this time......fancy).

I really grew to hate these cards.  Numerous ITG products have been pilfered for stamped insertion.  Decades 80s. Forever Rivals, Captain C, Decades 90s. And the cards have gone from being an extra giveaway at shows to insertions in current products.

And now the piece de resistance...... 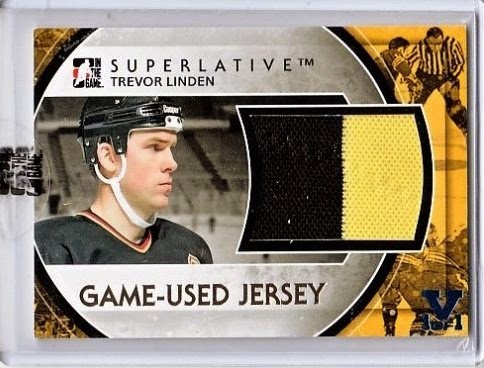 This stamped 1/1 comes from ITG's final product (as a non-Leaf effort) called Superlative Vault.  The idea is to take all the extra Superlative cards from various years, put a stamp on them and throw them into packs.

Now I can appreciate that there are some great ITG cards left unused as replacement backups or future show redemptions and some of them have outstanding patches from what I've seen.  You don't want to see them go to waste.

But to see yet another batch of cards that I've chased years ago makes me feel very uninspired to do so.

In The Game did a great job at placing the price points for these boxes in a range that made it great bang for your buck.  But the aftermarket is what worries me.

I've already come across a few copies of these "1/1's" and am already seeing people treat them (in terms of price) as if they were in the original products back in the day.

It's as if people are going to try and recoup their lost monies from these products that might have stung them over the years.  Case in point....the above card.

It's the silver version which I grabbed originally back in the day for maybe $10.  But now....because a special stamp has been placed on it, seventy bucks!

For a card that bring zero excitement in the sense that it's not new....not original.....and definitely not desirable for Linden collectors (or at least the ones I've talked to), the seller should be asking for a fifth of his price.

So I'm now left to add some new...err old cards to the wantlist AGAIN.

I'll be happy when this phase (and I really hope it's just that) ends and we can get back to creating new products with new ideas and designs.

And we can stamp out these silly cards.
Posted by bamlinden at 9:00 PM