LINDEN CARD(s) OF THE WEEK - Some Premier Patches

After a long and grueling summer work schedule, I am thrilled to say that I am now officially playing on holiday time.  For the next 10 days I will be staying far away from the workplace and knee-deep in other....stuff.

Actually, I'm really looking forward to Monday when I trek out to do some golfing in BC.  Letting some others hold the fort down while I smack the ball around for four straight days - that sounds wonderful.

And will the scorching hot temperatures in the city of late, I'm now fully climatized and ready for some perfect golfing conditions (cuz THAT'S the key to my game).

But before I head out, I get to share some fun bubble mailers.

It was a full mailbox for the past couple days.  Lots of goodies to show off.  Some Oscar Gamble adds that my #WalletCard will be sure to enjoy, a couple of real neat gifts and a pair of choice Linden cards that I've been anxiously awaiting.

When I caught wind that Upper Deck Premier would be including Mega Patch cards consisting of Linden in a Team Canada jersey, my ears perked up.  Never before had a Team Canada jersey been used in a memorabilia card of his.  And to see some of the initial cards hit the market....I was drooling. 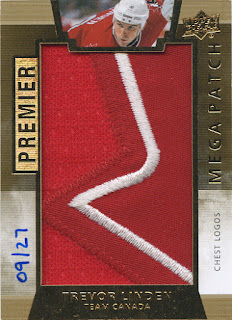 This was the first Linden Mega Patch to hit ebay and I had the radar on full.  Clearly a good chunk of the red leaf and just an overall aesthetic that I found simple...yet completely attractive.

It was on trade night earlier in the month that I was glued to my phone as the auction ended.  And while I paid just a little more than I wanted to (darn exchange rate), I'm more than happy to score this piece. 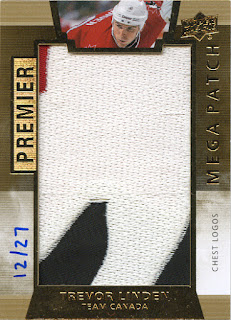 And when I saw this one pop up a couple days later, I started thinking of going for the Mega Hoarding project.  How about grabbing all 27 cards in the crest?  Why not!!!

OK....that's clearly unrealistic, but I would like to get my hands on a few of these cards as opposed to just one.  So I bid, but not nearly as high as the first copy.

What I like to do with Linden 1/1 cards out there (and do not be fooled by the serial numbering....these patches are each a 1/1) is keep track of who has them.  I also like to grab scans of any and all Linden 1/1's as part of my master database.

I'd love to eventually scan each of the 27 Linden patches in.  I think THAT would be a cool accomplishment....not to mention WAY MORE realistic. 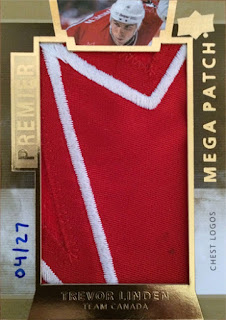 This copy I'm kicking myself on.  I saw it as a Buy It Now a couple nights ago and didn't pull the trigger.  It was (what I felt to be) at a fair price but I had to step back.  I've been buying a few cards of late and I didn't want to get in over my head.

I'm sure the feeling will pass as more of these cards come and go.

It's a nice one though. 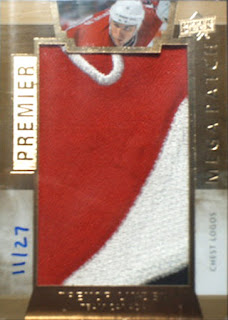 Just saw this one tonight on a hobby board.  I've put an offer in on it so we'll see what happens.

Looks like it's from closer to the middle of the crest.  No jersey material it seems. 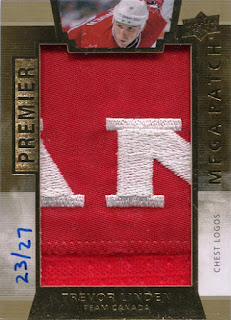 Another one I let go by the wayside on ebay.  Can't grab 'em all.

I wonder why they didn't get the letters more centered?  Obviously centering the whole crest is key when chopping it up, but just a little bit to the right..... 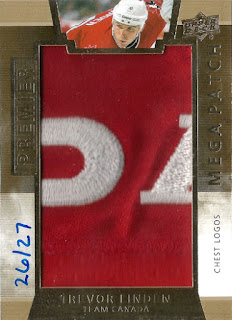 ...and this one would've been a little better too.

I think it going to say Canada.  But don't ruin it for me.

These cards are definite highlights of the year so far.  Something new that I've never seen before in terms of Linden cards.  And you'll never see me complain about that.
Posted by bamlinden at 9:55 PM