LINDEN CARD OF THE WEEK - Gotcha!!!

There are some cards that hit the market where I think "I'll be able to find this one locally."  It might take a few weeks, a card show or two, maybe a trade night - but I'll find it.

That attitude comes from the refusal to pay double, triple, or even more in shipping costs to secure a low priced Linden for my collection.  I just can't justify it.

Well, sometimes I ask myself if it will ever show up.  And I get more perplexed when I see dozens of other cards in the set....but no Linden.

Last weekend I finally crossed one off the list. 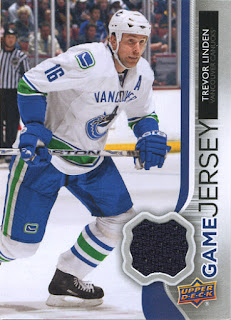 I'll start by saying that this might be my favourite design when it comes to the Upper Deck flagship jersey card designs.  Full player shot, vertical aspect and a nice die-cut shape.

I've seen 4 or 5 different color swatches in the dozens and dozens of Linden cards I've passed by on ebay.  Again....not gonna pay $5 on a dollar card.  And I've considered chasing one of each color (I did that a few years back).

But after realizing it's taken nearly a year to secure this Linden, maybe I'll leave it at just that.

One and done.
Posted by bamlinden at 5:49 AM