WALLET CARD - A Pretty Big One

What a great finish to the weekend.  I set up at my first card show in a year and it was tremendous.  Got rid of a lot of stuff (some of it I have had for a number of years), picked up a couple cards for different PCs (show & tells to come) and just the overall vibe and conversations were just what I want in a show.

I teamed up with Captain Canuck, splitting a table, and it was just right.  I was able to get around to the other tables, check out their wares and still feel comfortable with what I was leaving on my table.  It's totally the way to go.

Now in addition to the card show, it's been a great weekend for sports.  Football is in full swing, hockey is just ramping up and oh, by the way, the World Series is on.  I'm currently watching the Cubs trying to stave off elimination and they've just gone out in front.  I hope it's a 7-game series and that it's a crazy finish.  After the last couple games it's starting to feel a little anti-climatic.

So with the Indians and Cubs currently playing, I thought I'd share some of my #WalletCard pickups of late.  Did you know that Oscar played for both teams?  I wonder who he's rooting for this fall?

I've once again asked for the help of a fellow collector (who has a US address) to snag a few cards for me.  And I'm really glad he did.  The first one is a pretty big one for the collection. 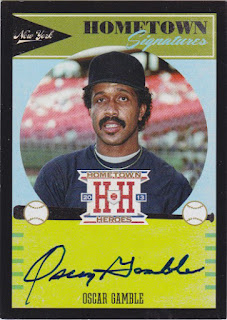 That's right....it's a bonafide 1/1.  The first one to hit my collection (and the first one I've seen on the open market since I started collecting Oscar Gamble cards a couple years ago).

I was pretty excited when I saw it pop up on my daily eBay searches and was even more excited at the conservative starting price.  I quickly asked for help and may have come across a little giddy.  It was a good laugh and he prepped a bid.

Much to my shock, the opening bid was also the winning bid.  I've never experienced that before.  Throughout my Linden travels I have never seen a true 1/1 not get any sort of competition.

So a very inexpensive 1/1 was coming my way. 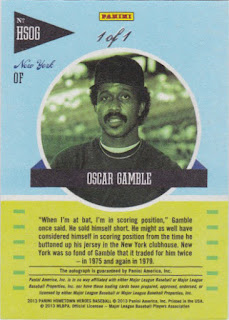 Here's the back of the card to savour the fine silver 1/1 foil stamp.  Very nice.

But that was not the only card to arrive in the package for my #WalletCard project.  And who am I to not give the other cards their proper due.

So without further ado.... 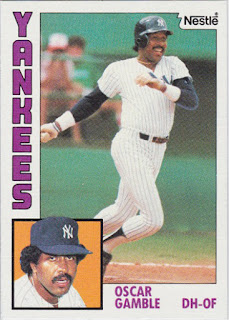 This is the infamous "Richard Pryor" card as I so lovingly refer to it....but the food issue parallel.  This card was part of a 792 card promotional set that was only made available in uncut sheets.  Seeing the single cards mean that they were hand cut (professionally of course).

Regardless, I like the variation and am happy to knock off this inexpensive parallel. 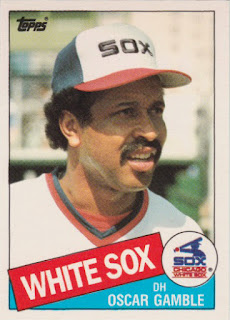 This is both a great looking card and a nasty one.  I loved this White Sox uniform as a kid but am bummed by the simple head shot.  You just don't get the full glory of the uni.

This Topps Traded card is designated as such by the card number on the back.  I was surprised to see the green back being so vibrant.  For a moment I thought I had the Tiffany version...but the front is not shiny. 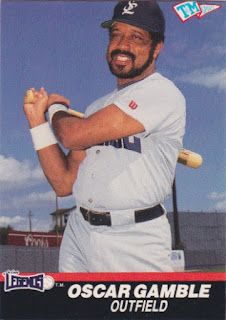 The card is nicely miscut (cropping a little too much off the top) but it's par for the course as all the copies I've seen look the same.

The team depicted....the St. Lucie Legends.  The card lists some career stats on the back.

Nothing amazing, but Oscar carved out a nice 17-year playing career.

So that's them.  These cards push my #WalletCard collection to 49 (oh so close to the milestone).  And technically I have already surpassed it as I have a half dozen cards waiting for me on COMC.  I may have to get them delivered before Christmas.

Heck, the more I go through these cards, the more I feel like every addition is a pretty big one.  That's what I love about this project.  It's just sheer fun.
Posted by bamlinden at 8:02 PM