There are times when I get a little caught up in the world of box breaking.  Not too much and not that often, but every once in a while it surfaces.

I've had some decent success at times too.  Be it my CFL box break a few months back, my nephew's good luck in picking a box of ITGU or the sheer joy in a half case of ITG Canadiana.  There's something so basic and fun when it comes to opening packs.  I truly believe it's the essence of this hobby....and I hope I never see a day where I no longer have the ability to bust boxes and open packs.

Recently, I've had an itchy trigger finger when it comes to baseball - especially the single hit autograph boxes.

At the most recent trade night I had my eye on a box for most of the night...and was good enough not to cave for most of the evening.  But the temptation got the better of me in the end. 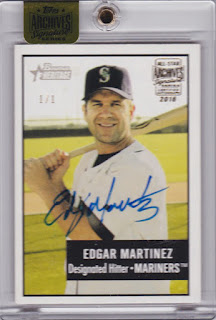 To me, Edgar Martinez will be one of two things - a Seattle Mariner and a Calgary Cannon.

I remember the days of heading down to Foothills Stadium and watching the Calgary Cannons play in the PCL.  They were the triple-A farm team for the Mariners and we got to see some great ball for a few years.

Martinez was always a fan fave and he was an incredible hitter.  Not a power hitter....but boy could he hit for average.

Always exciting to watch, I was happy to see him break into the bigs and make a name for himself.  Even in the large shadow of a guy named Griffey.

So will Edgar end up in the Hall Of Fame?  I hope so.  I think he has the resume but the fact that he was predominantly a DH might make the road a little bumpier.

Regardless, I'm thrilled to have pulled this card and am looking forward to having it in my trade box and hopefully working it towards a pc item.
Posted by bamlinden at 10:40 AM