A very busy weekend for me at work had me miss this month's local card show.  I hated to miss it as there were sure to be some new Lindens out there.  He's been featured in Artifacts, Overtime and Leaf Ultimate of late.  Add to that the excitement surrounding the release of Upper Deck Series I (and the uber-desirable Auston Matthews Young Gun rookie card) and the show was sure to be hopping.

Well, maybe not hopping....but one I wanted to check out.

Thankfully, fellow collector, blogger, good guy all around Captain Canuck came to the rescue and noticed a couple cards I might need.  A quick text back and forth and the cards are now in his possession.  Thanks in advance Cap't.

Let's see....what else.....oh yeah, I was a part of a Series I case break.  Team are randomly picked and I snagged a couple spots.  I couldn't be there for the actual box breaking (again...work) and it was probably a good thing.  I got Phoenix and Anaheim.  Yucky.  Not sure what "hits" I landed yet but I'm sure I won't be sharing them here.  I'm not holding my breath.

With that, let's get to some card scans.  A couple weeks ago at the big card show here in town my stablemate Captain Canuck tracked down a sweet looking basketball card.  I remember seeing a stack of them in a quarter box and decided it would be a fun couple bucks to spend.  I have pretty much no interest in basketball cards - especially cheap base from the 80's.

But boy do they look awesome. 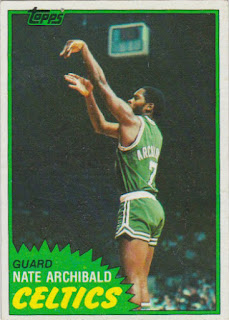 These come from the 1981/82 Topps set and my first thought was "what if they had these designs for their hockey cards?"  Customs to come at a later time. 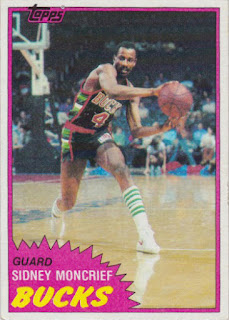 There really is no rhyme or reason to what cards I picked up.  I just wanted the ones I thought looked the best.....or the worst, which would still be the best.

I am instantly enamoured by the jerseys and knee-high socks.  Vintage at its best (ok....maybe the 60's and 70's would win out, but don't ruin this for me). 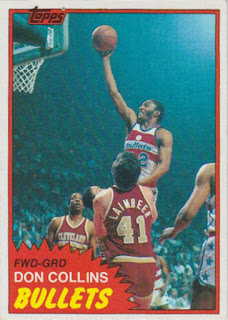 What a great action shot.  And yes, that's a pre-Pistons Bill Laimbeer cameo.  Extra points for that.

Again, the jerseys are tremendous. 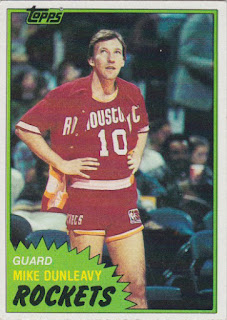 Those shorts with the "Rockets" on the side are pretty cool.....for short shorts.  The warm-up jacket though....very nice. 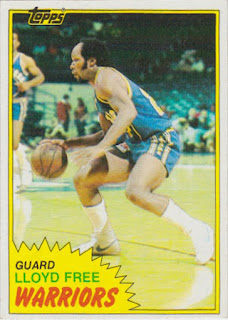 Pretty quiet night at the court I see. 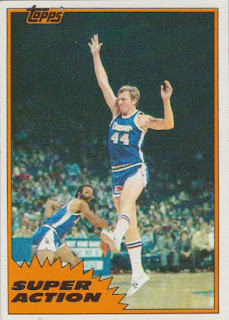 Can you really call this Dan Issel shot a "Super Action"?  I think more "High Energy Aerobics" as the better title.

Dude is tall though. 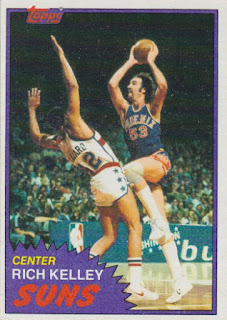 Now this is a super action shot.......right to the pills.

I think there needs to be more handlebar moustaches in the league these days.  And it's November to boot....even more reason. 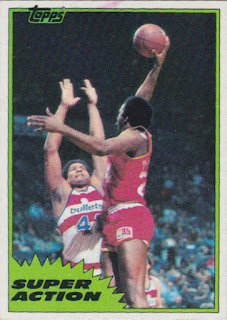 If you said Moses Malone...you'd be right.  Lookin' like he's about to do some teaching. 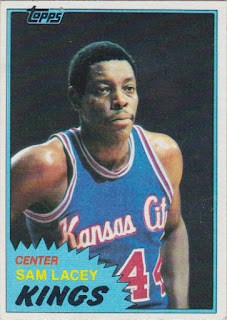 I picked up this card simply for the jersey.  Kansas City.  Other than that there's not much exciting going on with this card. 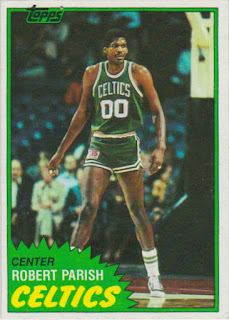 The Chief....Robert Parrish.  The silent giant.

I remember watching him back in the 80's when it was all about Larry Bird and Magic Johnson.  Parrish was a beast and took no crap from anyone.

He looks huge in this card. 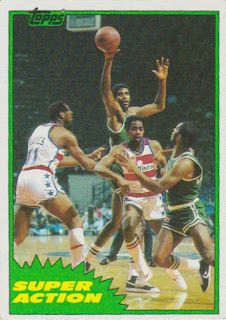 Here he is Super Action style.

He's just towering over everyone.  Awesome. 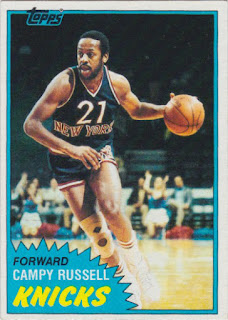 There needs to be more guys named Campy.....in all sports.

It's amazing how dark those backgrounds look (in most of the cards).  Boy photography sure has improved.  I can't tell if these games were just poorly attended or what.  Actually, at this time in NBA history, the league was really struggling and it wasn't until the Bird/Johnson pairing would revitalize the league as a whole.

But that was still a year or two away.

For now, we have Campy. 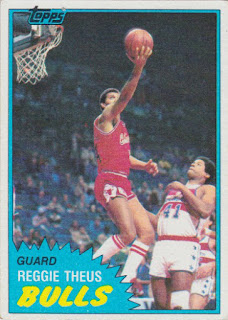 Nice reverse layup by Reggie Theus.  Looks like the Washington Bullets are constantly getting hammered in these photos.  I wonder if one of the main Topps photographers was based there and thus the plethora of Bullets? 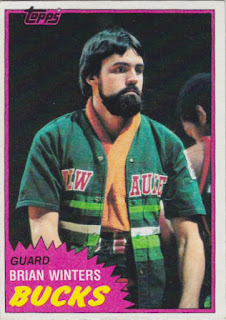 No action here.  Brian Winters looks pretty dejected.  Don't know why though as he's sporting one of the coolest warmup jackets I've ever seen.  And he's paired it nicely with a well groomed beard.

Win-win in my books.

Well that was too much fun....and worth the two bucks it cost to pick these up.

Have you ever bought cards for no other reason than thinking they look fun?  If you see a dime box or quarter binder you should give it a try.  Sure it's a waste of a buck or two....but it's a good time stepping outside the box.
Posted by bamlinden at 10:20 PM