A few cards have managed to hit my mailbox over the past month.  Not many...but enough.  One card though decided to take its own sweet time in getting here - no thanks to the guy who sent it.

Back in December I noticed one of the final cards on my 2013/14 ITG Used wantlist appeared on eBay.  It was decently priced but it did have a Best Offer option.  I noticed the shipping was a little higher than I'd like it to be so worked the seller down a bit to get the price where I was comfortable.

Well the shipping was high because it included tracking.  So I was patiently waiting to be given my tracking number.

You can guess where I'm going with this.

After the Christmas season passed I contacted the seller and asked for the tracking number (as the card had not yet arrived and it was past the "determined arrival date").

Excuse, excuse and excuse had me both concerned and frustrated.  After a while I stopped receiving communication.  The story he was giving me just wasn't adding up and I started calling him on it.

Long story short, I asked eBay to intervene - at first to try and get the tracking number....then to just get a refund and be done with it.  I was disappointed that a tough card to find (especially at the price I paid) was seemingly slipping through the cracks.

Well....a couple weeks after that debacle look what hit my mailbox... 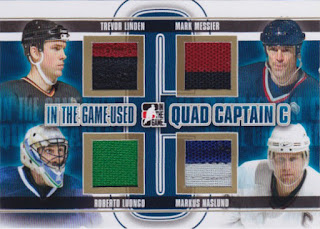 Nicely packaged in a bubble envelope.....with just a simple stamp on it.  No tracking number.  No real care to do so.

I could have just easily sat back and enjoyed my newest Linden acquisition but I needed to share the news with the seller.

So I told him it showed up.  And I told him that I was disappointed not to see tracking on it.  But I did offer to pay for the card (and only the card) as it did arrive (albeit late) and didn't seem to be damaged.

Much to my surprise....the seller said that I could keep the card for free and apologized for the poor communication.

Well.......I'm not going to argue with him.  I'm just glad the transaction can finally be closed.