BEHIND THE MASKS - Leaf Masked Men

Well.....two in two days.  I'm pretty sure this trend won't continue.  But let's enjoy it.

As I mentioned yesterday, I've been scanning some of the stuff on my desk, doing a little spring summer cleanup.  These cards come from one of the very few eBay pickups I've made this summer.

A couple weeks back I saw a tweet from a well respected hobby board member who mentioned he had a nice lot of cards up for grabs on eBay.  Included were a few of the latest Leaf Masked Men set.  I hadn't started building that particular set yet so I decided to pick up the auction.  After all, it was a very reasonable price and it had a nice bonus card to end things with.

So with that, let's take a look at what might be the least exciting Masked Men product I've seen in a mighty long time.  (For those who might not have seen some of my comments on the product from earlier....here you go). 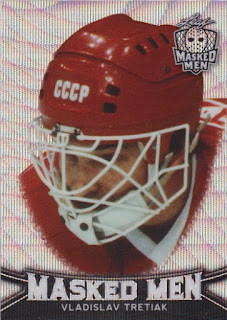 OK....first off, this is not a mask.  It's a helmet-cage combo.  And really, out of all the incredible goalie masks that have been worn in the almost 60 years of its existence, this is the best you could come up with?

Please, no need for Tretiak, Osgood, Dan Cloudier and Arturs Irbe.  Their "masks" just don't cut it in my opinion. 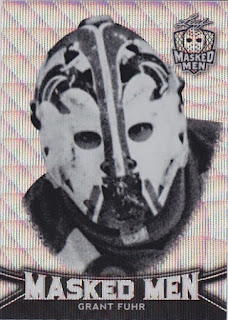 No doubt that if it were in color it would be a terrific card. 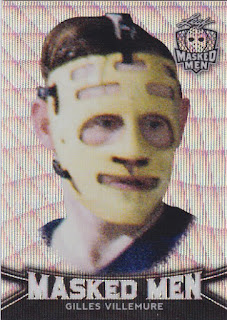 This Gilles Villemure offering is pretty solid.  Maybe a little grainy and thus oddly cut out....but I like that it pays homage to one of the all-time great masks.

A set that can offer a full checklist like this would be a start. 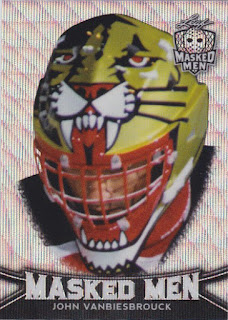 Beezer is another one of those "can't go wrong if you add him" players to a mask set.  I even like the angle of the photo.  It really showcases the mask effectively.

So it's official....I'm building the set.  These won't be something I aggressively hunt down - I'll only grab them when the price is right....real right.

But I do like my goalie mask sets so it'll be a fun build nonetheless.


Now, in addition to these four mask cards, there were some other inserts and rookie cards (nothing to really wow anyone with) but there was one card that had me think that this lot was a must-have. 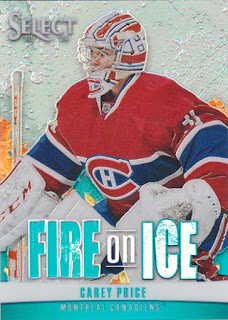 A nice Carey Price Fire On Ice insert.  It's shiny and sparkly (good qualities for a card) 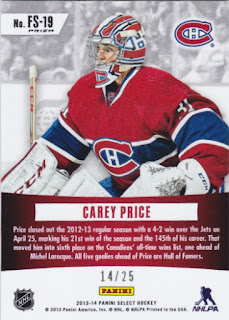