LINDEN CARD(s) OF THE WEEK - My Summer Haul

It's been a busy few months at work and things have slowly come back down to a pace where I can actually do some other stuff - LIKE CARD COLLECTING!!

While it was nice to take a few months away from the hobby again to replenish my collecting energy, I was getting antsy to buy a couple new cards for my Linden collection.  I had finally pulled the trigger on a couple eBay sales when I heard of this massive Linden collection being stolen.....definitely knocked the wind out of me.  I'm still not quite back to "full guns" yet....but I think the big card show in town helped me with that.

I love this time of year.  Hockey season is about to start, the monthly card shows are back and new product is out with all the new faces.  I'm excited at what the season will bring and I hope my various collecting projects will build nicely over the next few months.

So with that.....let's take a look a the "whopping haul" of Linden cards I've brought in over the past few months. 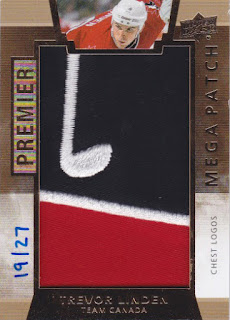 This was the big add to the pc this offseason.  I'll admit....this 27-card mega patch project absolutely excites me.  I love the fact that it's a Team Canada crest, and I know that the odds of getting every card is astronomically small (since a few have already hit other collectors) but just documenting them all will be a great accomplishment.

This piece gives me 5 of the 27 pieces and I'm almost on the verge of putting together a pic collage of what has surfaced so far.  The shoulder logo and sleeve number patches....well that's another thing. 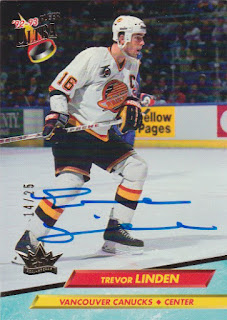 I don't know what it is about a two cent card being re-inserted into a product, but seeing these inserts had me chasing the Linden.  Must be the "junk wax" era design and great memories of what collecting was back in the early 90's.......ugly fun.

Much like the Score Recollection Collection inserts a few years back, these Fleer offerings are simple base cards with an auto and serial number - nothing more.  But I was thrilled to land this copy at the price I did (you don't want to know).  Amazing what a couple alterations to a card will do. 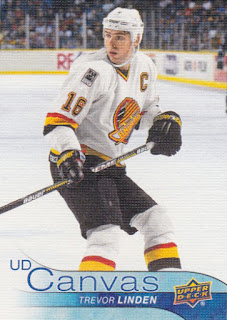 When Upper Deck introduced the Canvas inserts I thought it was a great idea.  New stuff to chase, tougher sets to build and I loved the dynamic photography the cards employed.

A few years back when they started putting in short print retired stars, I was waiting patiently for my guy to be added.  This past year it finally happened.

I really like this card.  It has a throwback vibe mixed nicely with a new card feel.  Not the most spectacular photo, but I'll give points out to anyone using skate logo-era garb (and check out that awesome patch on his shoulder).

I picked this one up at the big card show this past weekend.  It was a lot of fun getting back into those surroundings, talking to fellow hobbyists and just digging through boxes of goodies.  It's all about the hunt.

There were a couple other Linden cards there that I was contemplating, but sometimes you gotta let cards go by if the situation isn't right.


So that's it.  Three cards are all that I've bought since about May.....for the Linden collection.  I've got a few more projects to update over the next couple weeks.  After all....it's hockey season.
Posted by bamlinden at 12:11 AM