LINDEN CARD OF THE WEEK - A Golden Cameo

Seems as though I'm getting a little behind in my blog posts.  I've still got a few from my recent COMC purchase and I've actually done some purchasing at local shows and trade nights.  Fancy that.

Let's try and rectify things over the next week or so.

Today I'll share a pretty unique card to go in the Linden PC.

Years ago, I shared some of the Linden 'cameo' cards that have found their way into my collection.  What I really like about these cards is that they completely go under the radar of some collectors.  They aren't on any checklists (and they really should be) and normally if there isn't reference to the player.....it tends not to exist.

I've made a point of documenting every instance that Trev shows up on another player's card.  There aren't many.....but one of my recent pickups has me asking "How far do I go?". 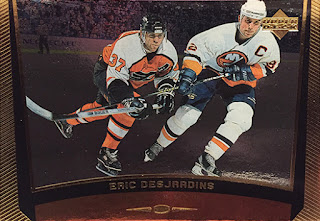 When I first saw the base card of Desjardins I immediately thought about the parallels that are out there.  He has the gold parallel, a challenging Exclusive /100 and a near impossible 1/1.  Should they go on the list or do I just find happiness in the simple parallels?

Well of course I add them to the list......I'm a completist.

I have no clue if I will ever land either of the remaining 'cameo' cards I need (or let alone see them) but there's no harm in adding them to the list - I'm never scratching them all off anyways.

Do you consider 'cameo' cards in your player PC?  If so, how many have you tracked down over the years?

Posted by bamlinden at 3:38 PM